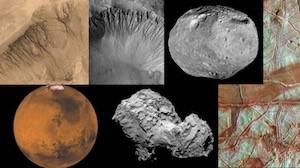 The last decade of planetary exploration suggests that the liquid water, uniquely characterizing, our blue planet is potentially a transitional phase that other bodies of our solar system may have gone through or will be transiting to during their evolution. On Earth, as well as other bodies of the solar system, the geological evidences of water and climatic evolutions are often found in the first few kilometers of the subsurface. Today, planetary radar sounding, and imaging techniques have provided new insights into understanding the unseen subsurface geology of the Earth, Moon, Venus, Mercury, comets and Mars—as well as numerous other bodies in our solar system hunting traces of water and ice and exploring new habitable environments. The returned data reveals the similarities and discrepancies between our planets and the other bodies of the solar system. In this seminar dedicated to the general science audience, Dr. Heggy will present how low-frequency radar sounding methods are being used to explore evidences of buried Martian geological features, including possible deep subsurface aquifers and ice deposits. He will also discuss the exploration of ice and organic materials on comets from the ROSETTA mission and provide an insight to both NASA’s and ESA's future plans to probe subsurface water on Mars and Jupiter’s icy moons. He will also discuss the similarities between the Earth deserts and several planetary environments in term of groundwater evolution.