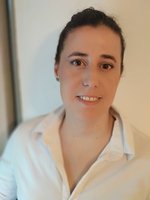 Nava Leibovich is a post-doctoral fellow at the Department of Physics since January 2020. She is part of the biophysics research groups of Professors Siddhartha Goyal and Anton Zilman.

Her current work focuses on the theoretical examination of ecosystems evolving under mutual competition between species. Her research is supported by the Council for Higher Education of Israel and by the Ben-Gurion University of the Negev, Israel.

Nava obtained her BSc in Mathematics and Physics, and MSc and PhD in theoretical Physics from Bar-Ilan University in Israel. Her research is concentrated on studying stochastic processes. Although every theoretical study uses simplified models, she believes that the role of a theory is to provide a framework to interpret the real world and to predict its behavior. For example, in her PhD research, she predicted the characteristic behavior of non-stationary power spectra and, in particular, the phenomenon called aging \( 1/f^\beta \) noise. The non-stationarity of the \( 1/f^\beta \) noise was measured in two different experimental systems; blinking-quantum dots, and growing interfaces in liquid-crystals turbulence. Both experiments agreed nicely with the theoretical predictions.

In 2019, as part of a post-doctorate research at UTM, Nava developed a new method to evaluate reaction rates of biochemical molecules. This method is general, and can be applied to other processes as well. The novelty of her approach can be captured by three key features:
First, only the stationary distribution is used for the birth-rate inference, without any dynamical information. Second, the dependence of the production rate of a given molecule on the number of other molecules in the system is considered. Third, because the structure and topology of the entire reaction network may remain arbitrary, only the specified part of the network for the relevant species is recorded.

Besides her research work, Nava likes to go hiking with her family and friends, meet new and interesting people and go jogging while listening to music.

If you would like to read more about Nava's research visit: https://www.researchgate.net/profile/Nava_Leibovich