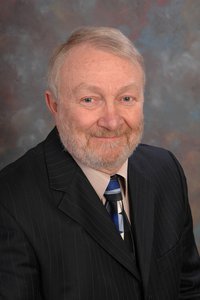 I never thought a lot about what I would do for a living. That decision always seemed somewhere in future. When I look back on my career path, it appears to be a series of logical steps and progressions. However, in reality, it was chaotic random walk combined with a lot of dumb luck.

When I was in elementary school, I collected insects, turtles and snakes and was fascinated with natural world but I didn’t realize that this could become a profession. I had a compelling curiosity about the world around me. In junior high school, the guidance counselors seemed exasperated when I did not know what I wanted to do. To avoid these frustrating discussions, I finally told them I wanted to be a medical doctor. I really didn’t but it got them off my back during our regular meetings.

My best subject in high school was mathematics so I thought I would major in this area. But university mathematics courses emphasized rigor and were very dry with little sense of wonder or discovery. I had interests in number theory and topics such as the distribution of prime numbers and the Riemann hypothesis. I didn’t have the patience to go through the many courses to get there but I did stick it out through calculus, differential equations and complex analysis. In second year, a course given by John Polanyi, encouraged me to take some third-year chemistry courses but they left me looking for a deeper understanding of nature. That’s when I decided to concentrate on physics. My favourite part of the physics courses were the laboratories (electromagnetism, electronics and modern physics) where you put your understanding of physics to the test. Most labs didn’t follow a recipe, they were open-ended and the student had to design the experiments. This was an important lesson for the real world where you don’t have a manual to guide you. I was also pleased, that in my other physics courses, I had learned how to use mathematics as a tool to describe physical phenomena.

So, at the end of four years, I majored in physics but I also had an eclectic background in mathematics, chemistry, biology and computer science. I wondered if and how I might use this knowledge. Now was the time to find out because I was ready to find a job.

I come from a family of engineers which meant that I was occasionally asked “What was I going to do with a physics degree?” I never had a good answer. When you are in the protective cocoon of the academic system, you simply go step by step: high school to undergraduate to grad school, post-doc and finally a job in the system. I had summer jobs making refrigerators and in construction to pay for school but the world outside academics still seemed far away.

But now I had to find a real job. I sent out many letters and had interviews with companies like Dofasco and Ontario Hydro. With an undergraduate degree, I found out that most positions would be at the operator or technician level. That wasn’t too appealing but it would pay the rent. I also looked into teacher's college (more education) to teach high school mathematics and physics. However, after several depressing months of job hunting, I was hired as a computer programmer in the high energy physics group at U of T. This was a two-year contract where I gained solid experience programming in Fortran on a DEC10 computer to analyze bubble chamber photographs from Fermilab, SLAC and Argonne. Working closely with the graduate students, who were part of massive projects, I realized that if I went to graduate school, I would prefer to have a small, independent experiment.

This was an exciting period in elementary particle physics and I was fortunate to witness attempts to confirm the existence of quarks. We scoured our data for the presence of the Ψ particle (a pair of charmed, anticharm quarks) without success. Later, the Nobel Prize was awarded for this discovery. I also listened to Murray Gell-Man give a talk about quarks at a symposium in honour of Harry Welsh’s retirement.

I had always planned to go graduate school. My interest was in the properties of metals and after talking with professors at U of T, they suggested that I approach Bertram Brockhouse at McMaster University. I became his last and at the time, his only graduate student, studying photons in silver by means of inelastic scattering of neutrons from the reactor in Chalk River. He was the most intuitive physicist that I have known. In his courses, in solid state and neutron physics, he would leap from one concept to another leaving a yawning chasm of unexplained steps. It was just obvious to him. Fortunately, my U of T undergraduate education allowed me to fill in the gaps.

I sometimes wondered how much he knew when he gave unsatisfying answers to my questions. However, I soon figured out that his philosophy of teaching was that you only learn by discovering something yourself. He knew the answer but he would only give me hints.

He also taught me to be humble. I was often invited to his house for dinner when famous physicists were in town. When one praised his work, he said “my work is insignificant when compared to that of Banting and Best”.

And by the way, he did receive the Nobel Prize in physics in 1994. I realized that no matter how hard I worked, I would never reach his level of competency. For that reason and the fact there were almost no academic positions, it was time to look for work rather than pursue a PhD.

After never-ending interviews with Atomic Energy and Ontario Hydro, I was hired by Abitibi Paper Company as a mathematician to work in their research centre. My post-graduate degree plus my background in computer programming and electronics exactly matched their job description. This was the dawn on the computer age for scientific and technical computing and I was well equipped to program their PDP11 mini-computer for these tasks.

To put this in context, there were no laptop or desktop computers at this time. Most computers were large mainframes in air-conditioned rooms and were programmed with punched, paper cards. The mini-computer was the first step in making computers available to a larger group of users. During my undergraduate degree, we did not even have calculators and used slide rules for calculations. This gave me an appreciation for significant digits which has been lost on many from the current generation.

My first project was to solve a vibration problem on a paper machine. For me, this was a straightforward problem of masses attached to springs and dashpots. In a couple of weeks, I wrote a computer program that modelled the system and found possible solutions. My job was done and I gave this to my boss expecting someone else would follow-up. To my surprise, I was told to be at the mill the next week to oversee the changes. When I arrived, the machine was apart. Metal rolls that are over 6 metres long weighing many tonnes were spread over the floor looking much different than my ball and spring model. I felt a pang in my stomach when the engineers said, “We have made the changes based on your recommendations. We will see you tomorrow morning when we start up the machine.” Well, it didn’t work. Sometimes you have to eat humble pie. Elegance is less important than results in the real world. But they did give me another chance. I took some measurements, revised the model and the next time, to my relief, it did work.

I went onto many other projects including a monitoring system for paper machines using the Apple IIe micro-computer. I wrote the software and designed the custom electronics for what was considered Abitibi’s top invention during a 10-year period. This technology was successfully applied in all Abitibi-Price’s North American mills. 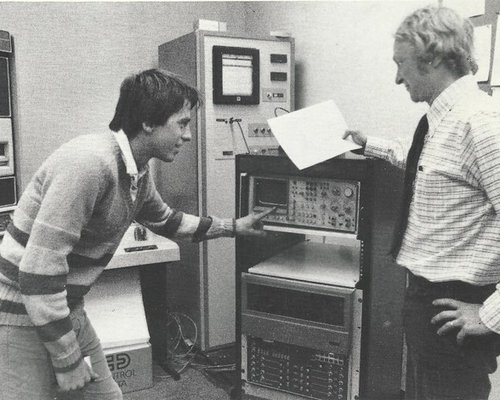 The PDP11 computer (on the left) which was a major step in computing power, had less capability than current laptops. David McDonald (right) when working for Abitibi Paper Company. 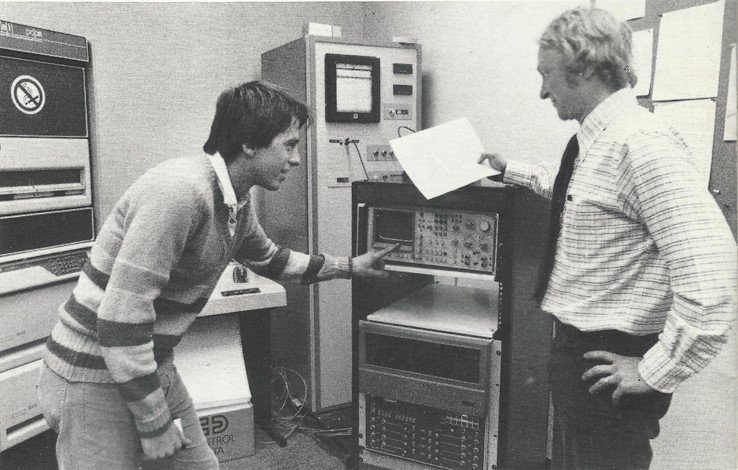 David McDonald Alumni Profile 2
The PDP11 computer (on the left) which was a major step in computing power, had less capability than current laptops. David McDonald (right) when working for Abitibi Paper Company.

After 6 years, I left Abitibi to join the Pulp and Paper Research Institute of Canada (Paprican) in Montreal. Although many paper products appear to be low tech, the processes to make them are anything but. In my own research, I used my knowledge in classical mechanics and differential equations, to model and improve papermaking and pulping. At Paprican, I rose through the ranks to become Vice President Research and Education. Along the way, I managed a group of chemists. My chemistry background meant I could speak their language which was useful in applying their research on preserving the optical properties of paper. Although this chemical to prevent yellowing from UV radiation was too expensive for paper, it is now used in clear coat stains for wood.

Over 20 years ago, I decided that the forest sector should be looking for opportunities in nanotechnology and instituted a program of research in this area. All those courses in quantum mechanics were now useful in understanding the behaviour of particles of nanometer size. We found that the nanocrystalline form of cellulose has unique optical and strength properties that can be exploited in a variety of products. This led to creation of CelluForce and the construction of the world’s first commercial plant to make large quantities of cellulose nanocrystals (CNC).

I am now an independent consultant and an adjunct professor at McMaster University. I have worked in a variety of projects including building a Canadian university network for the forest sector consisting of 100 professors and 400 students, advising work in genomics, green chemicals and biomaterials as well as serving on boards of companies and technical consulting around the world. I am still writing technical papers and have received the highest honours from the forest industry (the John Bates gold medal in Canada and the Gunnar Nicholson gold medal in the United States).

Looking back on my career, my only advice is be flexible and get the broadest education possible. Because you never know where life will take you.