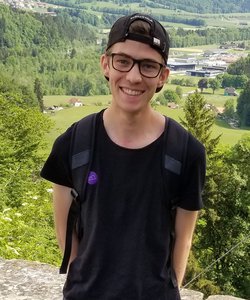 Matthew chose to study physics because he wanted to contribute to our understanding of the fundamental interactions between matter and the universe. He was inspired to pursue studies in this direction by his high school physics teacher, who demonstrated the subject’s captivating qualities while making it accessible and fun.

Coming from Kelowna, British Columbia, Matthew completed his Bachelor of Science with a major in Physics and a minor in Mathematics at the University of British Columbia’s Okanagan Campus. After finishing his bachelor’s degree, Matthew was unsure of the precise focus of his research program but knew there would be excellent opportunities for exploring different areas of interest at the University of Toronto. So he chose U of T Physics for his graduate studies because of the breadth and the quality of the research topics within the Department.

At U of T, under the supervision of Professor Robert Orr, Matthew studies particle physics with the ATLAS Detector at the Large Hadron Collider in Geneva, Switzerland. He performs precision measurements of Higgs boson production, providing stringent tests of the Standard Model of Particle Physics, with a focus on Higgs bosons decaying to pairs of weak bosons. He also contributes to ATLAS’s charged particle tracker upgrade, where he studies the performance of irradiated silicon technology.

Matthew’s research provides insight into the behaviour of the universe on the smallest scales. By stress-testing the Standard Model, he offers glimpses into where Beyond the Standard Model physics may lie, as the Standard Model is known to be an effective theory of nature. He achieves this by utilizing and advancing techniques and technology with applications ranging from large-scale computing to medical imaging.

Outside of his studies, Matthew is an avid runner. He loves spending time in nature, both as a hiker and as a gardener. Matthew also plays Dungeons & Dragons with his friends in British Columbia and in the Department of Physics at the University of Toronto.