The ﬁeld of ultracold atomic gases provides a unique perspective from which to study highly correlated systems. Ultracold atomic gases allow researchers to challenge the traditional “top-down” approach taken by condensed matter research. In a top-down approach, a material is probed and its complexity is simpliﬁed to ﬁt into a theoretical framework. Instead, an ultracold atom experiment lets researchers take a “bottom-up” approach. A simpliﬁed toy model is nearly replicated by the conditions of the experiment allowing for direct observation of the emergent behaviour of the system as relevant parameters in the model are varied.

The tunability of ultracold atomic systems has allowed researchers to access regimes where ultracold Fermi gases possess a number of universal properties. The properties are universal in that they do not depend on the underlying interaction and therefore apply to ultracold Fermi gases and also to exotic systems like the crusts of neutron stars or the quark-gluon plasma. While many of the universal properties of ultracold atomic Fermi gases have been studied in equilibrium, it remains an open question whether there is any universality in transport and dynamics of these systems.

In this presentation I will discuss spin diﬀusion as one example of universality in the non-equilibrium dynamics of a strongly interacting Fermi gas. I will explain the way we measure the magnetization of an ensemble of atoms to determine the parameters that govern the rate of spin transport. Furthermore, I will show how the collision rate and dimensionality of the system impact the rate of spin transport. Together, the data suggest that a universal lower bound on the rate of spin diﬀusion is obeyed and is set by the reduced Planck constant divided by the particle mass. 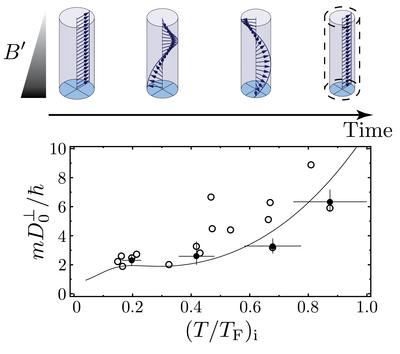