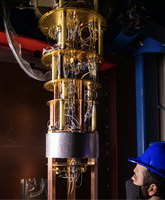 Enectali Figueroa-Feliciano
Northwestern University
The Power of the Dark Side: Discovering New Physics among Dark Matter and Neutrinos

The Standard Model of Particle Physics is a triumph or our era; it is also wrong. We have come to realize that all that we have known and seen in the Universe, the galaxies and planets which emit and absorb light, are but a tiny fraction of the whole. The dark side of the Universe, composed of Dark Matter and Dark Energy, holds the power to determine our ultimate fate. We will attempt to uncover the components of the dark side, through experiments seeking to detect dark matter and look for dark forces in neutrinos, and in so doing get clues as to the true nature of the Universe.