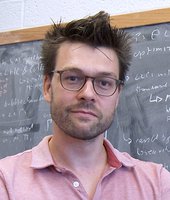 Four researchers from the Faculty of Arts & Science have received prestigious Sloan Research Fellowships for 2021.

The four, all assistant professors, are:

The research fellowships are awarded annually by the Alfred P. Sloan Foundation to early career researchers in Canada and the United States “whose creativity, innovation and research accomplishments make them stand out as the next generation of scientific leaders.”

“I’m thrilled that today four accomplished researchers were named Sloan Research Fellows,” says Melanie Woodin, dean of the Faculty of Arts & Science. “We are very fortunate to have these promising early-career scholars among our faculty. They are, without a doubt, researchers to watch.”

“A Sloan Research Fellow is a rising star, plain and simple” says Adam F. Falk, president of the foundation. “To receive a fellowship is to be told by the scientific community that your achievements as a young scholar are already driving the research frontier.”

Curtin has made important contributions in a number of research areas including: supersymmetry; the behaviour of quantum fields during the Big Bang; the Higgs Boson; so-called Long-Lived Particles that are relatively slow to decay; theoretical work related to the search for Dark Matter; as well as questions driving the construction of the next generation of detectors and high-energy particle accelerators.

Curtin’s quest for new physics is demonstrated in his proposal to build an innovative experiment named MATHUSLA to find previously undetectable particles generated by the Large Hadron Collider (LHC) — the largest particle accelerator ever built. Curtin is one of the leaders of the international collaboration developing the project.

“It is wonderful to receive this fellowship,” says Curtin. “It’s an especially cathartic piece of good news for me in the midst of the long pandemic lockdown. I take this honour as vindication of my approach to fundamental physics research — which blurs the lines between disciplines — and as encouragement to press on into new areas.

“This recognition will greatly aid my research program,” he says. “It underlines U of T's status as a world leader in fundamental science, which is vital to attract the top young talent and other resources we need to make our visions a reality.”

Curtin received his PhD from Cornell University and held research associate positions at Stony Brook University and the University of Maryland. He was hired in 2017 and officially joined the Department of Physics in 2018 where he holds the Canada Research Chair in Theoretical Particle Physics.

Read the full Arts and Science by article by Chris Sasaki here: