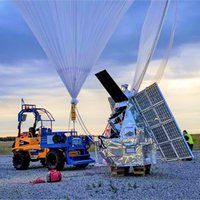 By Rahul Kalvapalle (U of T News)

Growing out of research at U of T, StarSpec is contributing to the 2025 NASA project by providing the suborbital research vessel that houses and controls the mission’s telescope, which will be deployed some 40 kilometres above the Earth’s surface after the balloon is launched from a volcanic island in Antarctica.

It’s hoped the NASA mission – one of several StarSpec is involved with – will both improve our understanding of exoplanets and put StarSpec one step closer to realizing its ultimate goal of helping small organizations, including researchers, access space by providing them with cheap, highly functional gear.

StarSpec aims to fill the “supply-chain gap” in space technology by providing gear such as its research gondolas, which are can house, support and control scientific instruments (photo courtesy of StarSpec)

“There is a growing class of people who want access to space either for astronomy, Earth-observation or satellite-based Internet, but need it faster and at a lower cost than is typically afforded by what I would call ‘the old space regime,’” says Javier Romualdez, StarSpec’s CEO and a former PhD student at U of T.