Chao-Yang Lu
University of Science and Technology of China 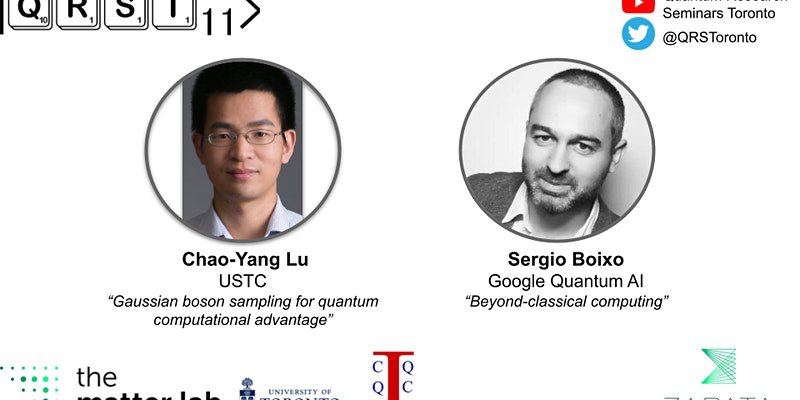 Quantum Research Seminars Toronto consist of two 30 min talks about some Quantum Computation topic. Seminars are given by high-level quantum computing researchers with the focus on disseminating their research among other researchers from this field. We encourage to attend researchers regardless of their experience as well as graduate and undergraduate students with particular interest in this field. Basic notions on quantum computing are assumed, but no expertise in any particular subject of this field.

In this 11th series of seminars, the speakers will be Chao-Yang Lu (University of Science and Technology of China) and Sergio Boixo (Google Quantum AI). Their talks are titled "Gaussian boson sampling for quantum computational advantage" and "Beyond-classical computing", respectively.

We will send a Zoom link to those who register for this event 2 days, 2 hours and 10 min before the event starts.

The event recording, slides and chat history will be published in our Youtube channel and sent to the registered participants.

Looking forward to seeing you all!

The main challenge for scaling up photonic quantum technologies is the lack of perfect quantum light sources. We have pushed the parametric down-conversion to its physical limit and produce two-photon source with simultaneously a collection efficiency of 97% and an indistinguishability of 96% between independent photons. Using a single quantum dot in microcavities, we have produced on-demand single photons with high purity (>99%), near-unity indistinguishability, and high extraction efficiency—all combined in a single device compatibly and simultaneously. Based on the high-performance quantum light sources, we have implemented boson sampling—which is an intermediate model of quantum computing, a strong candidate for demonstrating quantum computational advantage and refuting Extended Church Turing Thesis—with up to 76 photon clicks after a 100-mode interferometer. The photonic quantum computer, Jiuzhang, yields an output state space dimension of 10^30 and a sampling rate that is 10^14 faster using the state-of-the-art simulation strategy on supercomputers.

Chao-Yang Lu was born in 1982 in Zhejiang, China. He obtained Bachelor's degree from the University of Science and Technology of China (USTC) in 2004, and PhD in Physics from the Cavendish Laboratory, University of Cambridge in 2011. Since 2011, he is a Professor of Physics at USTC. His current research interest includes quantum computation, solid-state quantum photonics, multiparticle entanglement, quantum teleportation, superconducting circuits, and atomic arrays. His work on quantum teleportation was selected as by Physics World as “Breakthrough of the Year 2015”. His work on single-photon sources and optical quantum computing was selected by Optical Society of American (OSA) as one of “Optics in 2016”, “Optics in 2017”, and “Optics in 2019”. His work on photonic quantum computational advantage was selected by “UNESCO Netexplo 10 Digital Innovation”. He has been awarded as Fellow of Churchill College (2011), Hong Kong Qiu Shi Outstanding Young Scholars (2014), National Science Fund for Distinguished Young Scholars (2015), Nature’s top ten “science star of China” (2016), OSA Fellow (2017), Fresnel Prize from the European Physical Society (2017), AAAS Newcomb Cleveland Prize (2018), Huangkun Prize from Chinese Physical Society (2019), Nishina Asian Award (2019), Xplorer Prize (2019), IUPAP-ICO Young Scientist Prize in Optics (2019), OSA Adolph Lomb Medal (2020), Rolf Landauer and Charles H. Bennett Award in Quantum Computing (2021), World Economic Forum Young Global Leader (2021), and James P. Gordon Memorial Speakership (2021). He is the Chair of Quantum 2020 and has served as an editorial board member in international journals such as Quantum Science and Technology, PhotoniX, Advanced Photonics, Advanced Quantum Technology, Science Bulletin, and iScience.

The promise of quantum computers is that certain computational tasks might be executed exponentially faster on a quantum processor than on a classical processor. A fundamental challenge is to build a high-fidelity processor capable of running quantum algorithms in an exponentially large computational space. I’ll explain an experiment published in Nature in 2019 in which we carried out a computational task on an experimental quantum processor vastly outperforming current supercomputers. I will briefly review recent advances in complexity theory and simulation algorithms related to this experiment. Finally I’ll mention some other recent experiments performanced in the same universally programmable platform.

Sergio Boixo leads the Quantum Computer Science group at Google Quantum AI. He was previously a research professor and quantum engineer at USC, and a postdoc at Harvard and Caltech. Sergio has a doctorate in physics from UNM, a master's degree in physics from UAB, is a computer engineer from UCM, and studied mathematics and philosophy at UNED. In a past life, Sergio worked as a computer engineer at the European Central Bank and other companies.