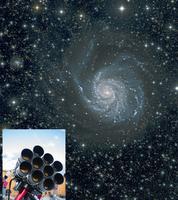 In this talk I will describe some early results from the Toronto/Yale Dragonfly Telephoto Array (a.k.a. Dragonfly), a robotic imaging system optimized for the detection of extended ultra low surface brightness structures. Dragonfly is comprised of multiple (expensive!) commercial 400 mm f/2.8 telephoto lenses which have high performance sub-wavelength nanostructure optical coatings designed to minimize scattered light and ghosting. This instrument is optimized to explore the night sky in a totally different parameter space from the Hubble or Keck telescopes, and in its chosen niche no other telescope can touch it: Dragonfly's wide-field low surface brightness imaging performance is capable of directly imaging low surface brightness structures (such as galactic streams, galaxy stellar halos and faint dwarf galaxies) about 10x fainter than is possible with conventional telescopes. In this talk I'll show some early results, mainly focusing on the properties of ultra-faint stellar halos, though I'll also report the discovery of a new class of ghostlike galaxies that are as big as the  Milky Way but have about 1/1000 of its mass.