PEARL’s main building, the Ridge Lab, is 15 kilometers from Environment Canada’s Eureka Weather Station, up on a ridge overlooking stunning Arctic fiords and waterways. At 80°N latitude, PEARL is more than 4000 kilometers (about 2500 miles) north of Toronto (43°N).

What kind of work takes a PhD candidate from U of T to an experimental lab at the northern edge of Canada? Start with climate, ozone depletion, atmospheric dynamics, and air quality.

But while the geographic location of the lab may be in the far north, Weaver’s work isn’t just about the remote Arctic environment – it contributes to our understanding of processes that affect the entire planet.

“The data collected at PEARL is highly valued by international collaborators because the lab’s location is strategic; it’s the only one of its kind in this part of Canada, which lends valuable data to networks of observatories around the world,” says Weaver. “As scientists advance our understanding of the Earth’s atmosphere, PEARL contributes a key piece of the puzzle."

This week, Weaver and the other researchers will fly more than a thousand kilometres north to Edmonton where they will catch another flight to Yellowknife (62°N – roughly the same latitude of Iqaluit, the capital of Nunavut). That’s the half-way point of their trip; from Yellowknife, they’ll charter a plane to Eureka, stopping in Cambridge Bay and Resolute to refuel.

Weaver will spend the next month conducting research at PEARL – and he’ll be filing weekly dispatches to www.news.utoronto.ca complete with photos.

Do you have a question for Weaver about his research? About what it’s like to live and work where the only visitors are Arctic hares, foxes or polar bears? Email your queries to: uoftnews@utoronto.ca.

Below, Weaver shares some of this thoughts on his return to PEARL. 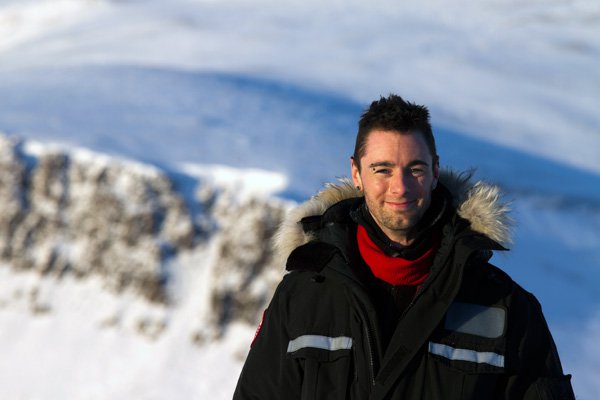 How do you pack for the Arctic?
It’s important not to forget anything when packing for a trip to a remote high Arctic research outpost. There is no store. No vending machines. There’s food and basic soap. Everything else must be brought. The first time I packed for this trip, I thought of it like a wilderness camping trip (a hobby of mine).

There are two priorities when packing for this trip (aside from anything needed for research): clothes to stay warm and stuff to ensure your happiness. We are away from our friends, family and homes for a while. Often four weeks. The Internet connection is ok, but not always reliable. It’s important to have something to keep yourself emotionally healthy. Books, videos, games, or chocolate are all favourites. If someone expects they will want a beer during their month in the high Arctic, they have to bring it in their luggage!

I’ve dramatically improved my ability to enjoy winter at home by investing in warm clothes for the Arctic. I have good gloves and a scarf. Having a variety of layers is important. I bring fleeces and hoodies. Below -40°C my full mask makes a huge difference to my comfort.

In terms of entertainment, there is a TV and a Nintendo Wii at the Eureka Weather Station which we can often use. Last year, someone brought the first couple seasons of Game of Thrones . I hadn’t heard of it before, but I returned home a fan. This year I plan to bring Super Mario Kart for my colleagues and I to play when we have downtime. It’s important to get our minds off of work during the limited number of hours we have to ourselves.

Why Eureka?
PEARL’s location is extremely remote, and its environment is difficult to work in. The nearest community, Grise Fiord, is over 500 kilometers away and has only 140 people. It takes us two days to travel from our homes in southern Ontario to Eureka. But there are tremendous advantages to working there. Very few observatories exist in this area of the world, and there are significant scientific questions that can only be answered by taking measurements in the far North.

For example, Eureka is a “sweet-spot” for supporting satellite missions – in particular when it comes to tracking how well a satellite is performing. Once a satellite is launched into orbit, we can’t easily check up on it to see if it’s working as expected. But satellite performance still has to be tracked, and over time satellites do wear out.

These validations are important all over the world. For instance, PEARL measurements help validate the Japanese space agency’s mission that measures greenhouse gases. Even more significantly, PEARL was recently selected as a validation site for NASA’s upcoming OCO-2 mission (Orbiting Carbon Observatory).

But the focus of our satellite work is two sophisticated Canadian satellite missions – ACE and OSIRIS – which pass over Eureka frequently.

ACE, the Atmospheric Chemistry Experiment, is a Canadian-designed, built, and operated satellite mission. OSIRIS is a Canadian instrument aboard the Swedish Odin satellite. Both measure the Earth’s atmosphere from space, and are validated by measurements taken at PEARL. It’s one of the primary reasons we've had measurement campaigns during late February and March every year since 2004.

Through our validation work we can proudly say that Canada’s ACE and OSIRIS missions have been incredibly successful, and continue to provide Canadian scientists with global datasets. In fact, ACE celebrated 10 years of collecting scientific data just recently: on February 21, 2014. The ACE mission is a remarkable Canadian science success story.

And beyond checking up on satellites?
In 2010 there were massive fires in Russia, near Moscow. The smoke from those fires travelled vast distances across the polar region, and was measured at PEARL. It took a week for the smoke to reach the high Arctic, but it then remained in the area for months because it was caught in an atmospheric circulation pattern.

This wasn’t a unique case. At least 10 times between 2008 and 2012, large fires released pollutants that reached the high Arctic from across North America and Russia. It is a spectacular example of our planet’s interconnectedness. Pollutants produced down south can be transported to the most remote regions of the planet.

As our planet changes due to climate change, these types of events may occur more frequently. Their impact on the Arctic is uncertain, and requires more research, more observations, and more people working in places like PEARL.

Eureka is valuable for more than just atmospheric research. Astronomers have been testing conditions for a potential new Canadian telescope, likely to be located next to PEARL.

Atmospheric conditions appear excellent for astronomy – some of the best in the world. There is nearly no light pollution, low water vapour, minimal pollution generally, and the sky is often cloud-free. It is also dark for months at a time, which carries significant advantages.

Biologists also frequently visit Eureka because there is a surprising diversity of wildlife and plants nearby. It is known as the “Garden spot of the Arctic.” Even during winter trips to PEARL, our team sees Arctic hares, wolves, muskoxen, and foxes.

Watch www.news.utoronto.ca for the next instalment of Reporting from the Arctic, when Weaver explains how scientists handle a snowy commute where there are no plows.