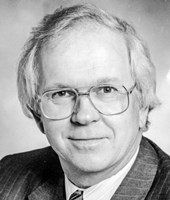 A faculty member’s impact is usually measured in terms of contributions to teaching, research and administration. Most do well in one, or even two of these areas. Robin Armstrong excelled in all three and was a major figure in Canadian physics for over four decades. He did all this alongside his wife of 61 years, Karen, with whom he raised two sons, Keir and Drew. Keir is currently an Associate Professor of Economics at Carleton University and a former Chair of his department. Drew is an Associate Professor and Director of Architectural Studies at the University of Pittsburgh. Karen recently published her first peer-reviewed article on nineteenth-century stone houses in Oxford County, Ontario (Journal of the Society for the Study of Architecture in Canada, 43, 27 (2018)).

Robin passed away on December 17, 2021 at the age of 86. His career, with dates and major awards, is nicely summarized in the obituary prepared by his son Keir and I will not attempt to repeat that here but rather provide a complementary perspective.

Robin’s career was almost derailed before it got started. As a top undergraduate student in the honours Math, Physics and Chemistry (MPC) program at U of T, Robin had been recruited to be a graduate student by Harry Welsh in 1958. At the time, Harry had many graduate students (he would supervise 65 over his career) working on experimental infrared molecular spectroscopy and didn’t spend much time with the energetic and ambitious newcomer in his first few weeks. Robin approached Harry saying that he was seeking a new advisor. Harry immediately gave Robin a challenging project into which Robin plunged, completing his PhD in 1961. It is difficult to imagine how Robin’s career would have evolved without Professor Welsh’s mentoring and friendship.

Towards the completion of Robin’s PhD thesis, Harry saw him as a potential faculty member and colleague but advised that he could not become such in infrared spectroscopy since the Department was already strong in that area. Robin therefore took his NRC Rutherford Memorial postdoctoral fellowship to Oxford University and studied Nuclear Magnetic Resonance (NMR) spectroscopy. When he returned to Toronto in 1962 and established a research program in this field, he initially working with compressed gases as he had for his PhD. Thus began a prominent career in teaching, research and administration. Here are some highlights.

Teaching. Robin’s first teaching assignment was the large first-year course for physics majors and life science students. He was so popular and engaging as a lecturer that students often commented that he should teach others how to teach. He produced his own course notes, assembled them in paperback form, and sold them to the students as early as 1966. By 1970, along with Jim King, he developed the notes into a textbook, which Prentice-Hall published as Mechanics, Waves and Thermal Physics. The text eventually saw wide adoption in Canada and around the world. A (contractually required) companion volume The Electromagnetic Interactionwas published in 1973.

During the 1960s, the Department expanded greatly, moving into its present building in 1967. Undergraduate student enrolment grew to 3000 and the faculty complement more than doubled from 26 in 1960 to over 60 by 1970, including those appointed to the new satellite campuses of Scarborough and Erindale. In late 1968, Professor Welsh stepped down as Chair after six years. The new Chair, Jim Daniels, appointed two Associate Chairs, one to oversee graduate studies and the other undergraduate studies. The 33-year-old Robin accepted the latter position. This was a challenging time for the University partly because of the large increase in enrolment. In addition, by 1969, pressure from Ontario’s Education Minister Bill Davis led the University to revamp undergraduate studies, doing away with the three-year general programs and the highly prestigious and demanding four-year honours programs in Arts and Science, including MPC. Robin was tasked with helping to develop the “new programs” in physics, with students given more choice in course selection through specialist and major programs. These reforms largely remain with us today. (Interestingly, the prestigious four-year Engineering Science program continues to exist to the present day and maintains connections to the Physics Department, especially through its various specialty options.)

Shortly after becoming Chair in 1974, Robin suggested to the faculty that a second-year course in quantum mechanics (QM) be offered. QM had never been taught below the third-year level. Many physicists felt that second-year students didn’t have a strong enough foundation to handle QM concepts, even though chemistry professors at U of T, including future Nobel Prize winner John Polanyi, were already teaching first-year students how to solve Schroedinger’s differential equation for the hydrogen atom! The Physics faculty finally came onside provided that Robin or Nathan Isgur, another inspiring young instructor, taught the course. Robin took up the challenge and once again developed his notes into a softcover text. He hoped to develop this into a textbook but increasing administrative duties overtook that ambition and Nathan eventually took over the course.

Administration. Between 1969 and 1990, Robin served the Department of Physics as Associate Chair and Chair, and the University as Dean of Arts and Science. While Chair, and later as Dean, he helped start the careers of many new young faculty in the Department, including my own from the year 1976, having also earlier served as my PhD mentor. He also launched several major initiatives that continue to figure prominently in the life of the Department and Canadian physics today. Let’s consider some of them.

On the occasion of Harry Welsh’s 65th birthday in 1975, Robin, several of Harry’s former graduate students, and the Physics Department, endowed an annual series of lectures to honour Harry’s substantial contributions to the Department and University. At the inaugural lectures in May 1975, more than 40 of Harry’s former students along with 500 others from across the University enjoyed listening to seven well-known physicists, including Nobel Prize winners. The President of the University, John Evans, attended the formal banquet along with members of the Department.

In the early 1980s Robin, together with members of the Department of Astronomy, argued vigorously with their colleagues to locate the Canadian Institute for Theoretical Astrophysics (CITA) at U of T with new, joint faculty positions. Many initially opposed the unique structure of CITA with its research professors, knowing that it would also “cost” faculty positions in other areas. However, other universities across Canada were also lobbying hard with their own bids. Eventually, the faculty saw CITA’s merits and it continues as a jewel in the crown of U of T to this day.

Always a strong proponent of excellence, in the early 1980s Robin also worked tirelessly to establish the Canadian Institute for Advanced Research (CIFAR), becoming a Founding Director and serving on its Research Council from 1982 to 1989. This is today a major Canada-wide research enterprise. While Dean, he was also a founding member and President of the Canadian Institute for Neutron Scattering and served as a member of TRIUMF’s Management Board in Vancouver. In 1990 he became President of the Canadian Association of Physicists.

In 1990 Robin accepted the Presidency and Vice-Chancellorship of the University of New Brunswick (UNB). During his six-year tenure he successfully launched and executed a major fundraising campaign, opened UNB St. John’s first student residence, revised the student recruitment process, and established new research chairs and research centres in a number of fields, including space science, pulping technology, social policy and family violence. Because of all these initiatives and for his own research accomplishments, he was awarded an honorary Doctor of Science degree by UNB in 2001. Upon retirement from UNB in 1996, he became an Honorary Research Professor, retaining that title until 2001. In 1996 he and Karen also returned to his roots in Southwestern Ontario, purchasing a farm near Woodstock. They sold this in 2012 to move permanently back to Toronto. He became an Emeritus Professor at U of T in 1998. Even in retirement however, he continued in administration as Chair of the Board of Directors of the Canadian Arthritis Network, one of Canada’s Networks of Centres of Excellence.

Research. Beginning in 1962, Robin established himself as one of Canada’s most prominent NMR spectroscopists. Much of his research program over several decades centred on NMR probing of collision dynamics in gases and magnetic resonance imaging (MRI). (The word nuclear was dropped from NMR and NMRI around 1980 since the (typically non-radioactive) nucleus is only used as a passive probe and the word was considered too toxic or scary by many, especially health care professionals.) However, magnets are expensive and the NRC granting agency was unlikely to offer Robin a second one early in his career. So, hoping to expand his group with his meagre resources, he began a program in Nuclear Quadrupole Resonance (NQR) spectroscopy. Instead of the interaction of a magnetic dipole with an external magnetic field, which forms the basis of NMR, NQR involves the interaction of the electric quadrupole moment of certain nuclei with the local electric field gradient in a solid. The RF resonance frequency and the nuclear relaxation times are sensitive probes of lattice symmetry and phonon dynamics. This led Robin and his graduate students to probe displacive phase transitions in antifluorite and perovskite structures driven by “soft” phonon modes. By the mid-1970s Robin, knowing that NQR and neutron scattering are complementary probes of lattice dynamics and structure, established links with Atomic Energy of Canada scientists at Chalk River, including Bill Buyers, to also probe antifluorite and perovskite crystals with neutron scattering. Robin and his students spent many summers working at Chalk River. The research programs evolved to elaborate spin interaction in perovskite crystals, eventually confirming the existence of the “Haldane gap” in the spin-1 antiferromagnet CsNiCl3 in its 1-D phase (Phys. Rev. Lett. 56, 371 (1986)). Duncan Haldane was awarded the Nobel Prize in Physics in 2016 for, inter alia, his theoretical work on the existence of this gap and topological effects in 1-D spin systems.

Even while serving as President of UNB, Robin used his research reputation to acquire state-of-the-art MRI equipment and established a world-class facility that was used by his research group and many colleagues. He had also helped to establish a similar facility at Toronto Western Hospital in the 1980s.

During his long and distinguished career, Robin mentored 31 PhD students and 20 postdoctoral fellows/research associates, all of whom owe much to his guidance. After he became involved in administration, beginning with the time-consuming Associate Chair position, every month he invited his research group to his house in Don Mills in the evenings to practice giving presentations based on a published paper. It was hard to decide which was more enjoyable, learning how to defend oneself against Robin and others in the group or relishing the coffee and pastries that Karen had prepared for us afterwards.

Most of Robin’s graduate students had Canadian backgrounds, but beginning with Carlos Martin in 1972, five came from and returned to the University of Cordoba via the “Argentinian connection” as Carlos called it. Over the years they in turn established a major NMR program of their own which has continued to flourish despite a challenging funding environment. Robin and Karen visited Argentina twice, with Robin providing advice for the program and helping to mentor the graduate students and assist them in writing scientific papers in English. It is with pride that Robin accepted the designation Visitante Distinguido from the University of Cordoba. 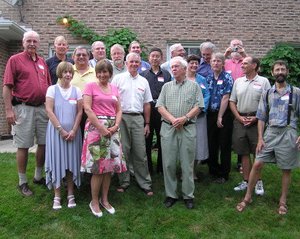 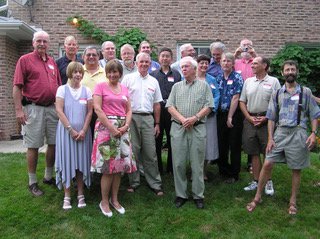 In recognition of his considerable research contributions, Robin was awarded the 1973 Herzberg (Early Career) Medal and 1990 Gold Medal for Lifetime Achievement from the Canadian Association of Physicists, and Fellowship in the Royal Society of Canada in 1979.

Robin was indeed a very special person and will be missed by all who had the privilege of knowing him. To quote Gregory Baker, who obtained his PhD with Robin in 1970, “[his passing] is definitely a loss for all who knew him, for all who benefited from his life and from his work as an educator and scholar. He was indeed a perfect example of both, and a virtuous man as well. He always looked for the good way forward, cognizant of his responsibilities to others, always seeking to do the ‘right’ thing.”