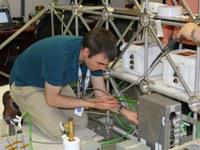 Kaley Walker, from the school’s department of physics, said CALASET uses a laser to shine through the atmosphere between two circular mirrors 112 times to measure gases in the atmosphere and how they change with height.

“What we care about is greenhouse gases. So what we’re trying to do is measure carbon dioxide and nitrous oxide. One of the main objectives for what we’re developing is that it could be used for future satellite missions to validate results,” Walker said.

“If we know very precisely how that variation happens while we’re measuring on the balloon and the satellite’s making its measurement, then we can compare the two and use it to confirm how well the satellite’s working; which is a really critical part of knowing how our satellites work.”

The gondolas the agencies use to launch the plastic balloons are transported from France, since Canada does not have its own model yet.

Sébastien Lafrance, systems engineer and mission manager for the Canadian Space Agency (CSA), said the CALASET gondola weighs about 470 pounds and would be launching around 34 kilometres in the air. Larger gondolas they also plan to launch over the next few weeks will weigh from 610 to 1,100 pounds and measure different greenhouse gases.

The CSA and the Centre national d’études spatiales (CNES) work in collaboration with students to launch these balloons every summer.

According to the CSA website, the Stratos program “has allowed 24 Canadian instruments and experiments to be launched into the stratosphere. More than 150 Canadian experts have participated in the balloon campaigns, including 80 students.”