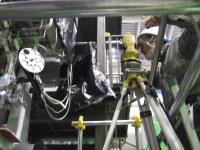 The T2K group at U of T include graduate students Corina Nantais and Trevor Towstego, engineer Mircea Cadabeschi, and faculty members John Martin and Hirohisa Tanaka.

The T2K experiment uses a neutrino beam produced at the Japan Proton Accelerator Research Complex (J-PARC) located in Tokai village, Ibaraki prefecture, on the east coast of Japan. The beamline can produce both a muon neutrino and muon antineutrino beam. This beam is monitored by a detector complex 280 m from the neutrino target and aimed at the Super-Kamiokande detector 295 kilometers.

U of T contributions played a decisive role in this new result. During this time, the beam power delivered by J-PARC to the neutrino beamline steadily increased to 420 kW. John Martin and Mircea Cadabeschi participated in the design and construction of the optical transition radiation beam monitor (OTR) built by U of T, York University, and TRIUMF, which played a critical role in maintaining steady beam operation.

The analysis effort was led by former U of T postdoc Mark Hartz (now at TRIUMF and IPMU), who heads the T2K oscillation analysis group, and Hirohisa Tanaka, who leads the overall analysis effort on T2K and serves as principal investigator of the T2K effort in Canada.

This result is based on a data set that represents about 20% of the total exposure expected at T2K by 2021. T2K will continue to accumulate neutrino and antineutrino data, aided by a recently approved upgrade to the J-PARC Main Ring which is expected to roughly double the beam power provided to the experiment.

More details on the results and future plans can be found here: