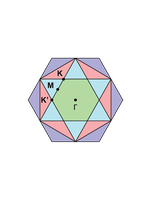 Ultracold-atom quantum simulators are powerful experimental tools that provide insight into the properties of crystalline solids. Important crystalline solid properties, such as electrical resistivity and optical absorption, are set by the crystal’s energy band structure (bands of the allowable energies of electrons in the potential generated by a lattice arrangement of atomic or molecular ions). However, it is not only the band structure that determines the properties of a crystal. The band structure may have points where two or more bands are degenerate in energy, and where the wave function used to describe the system becomes ill-defined (i.e., singular). This means that the local geometry and global topology of the space in which the wave functions live are important for explaining exotic material properties (e.g., quantum Hall effects and orbital magnetism).

In this talk I will describe our recent experimental studies of band-structure singularities, performed by investigating a non-Abelian transformation produced by transport of atoms directly through singular points. We produce a Bose-Einstein condensate and load it into one band of an optical honeycomb lattice, before accelerating the atoms along a quasi-momentum trajectory that enters, turns, and then exits the singularities at linear and quadratic touching points of the band structure. From measurements of the band populations after transport we identify topological winding numbers for these singularities to be 1 and 2, respectively.