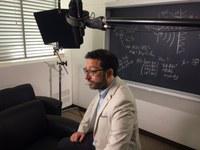 Airing around the time of the 40th anniversary of Star Wars, episode 1 or season 8 asked IS THE FORCE WITH US? This episode explored new research that is beginning to reveal a hidden force in the universe – one that penetrates space with trillions of invisible connections, instantly linking every place in our world and joining our future with our past.

The film crew came to Department of Physics for a full day in June 2016 to interview Professor Steinberg and film his lab in the basement. Pictures from shoot can be seen below.

We asked Professor Steinberg questions about this episode and the experience of filming it.

What was your contribution to this episode?

Much of the episode focuses on entanglement and quantum uncertainty, and in the segment I participated in, they wanted to talk about “trajectories” in quantum mechanics.  This was based on some experiments we had done on David Bohm’s interpretation of QM, and in particular a recent one on what are sometimes known as “surrealistic” trajectories.

Did you use your research to explain the keys concepts of the episode?

For a segment which lasts maybe 6 minutes, it was impressive to see how much time and effort went into it.  The producer who contacted me, Adam Feinstein, exchanged many emails with me and we had a few hour-long phone calls, in which he asked questions about physics and I tried to explain to him as much as I could about entanglement, weak measurement, Bohmian trajectories, and our experiments.  But in the end, they had a pretty good idea of which aspect of the physics they wanted to cover, even if it wouldn’t have been my first choice.  They tried to come up with a variety of visual analogies to give viewers a sense of the physics, and I spent a lot of time critiquing them and offering other options, and the resulting spirit of compromise left us with weather reports and umbrellas and cars with entangled turn signals…  Earlier there had been some talk of interesting scenarios for trying to convey the concept of “monogamy of entanglement,” but they must have decided that all of the metaphors we found quickly turned too risqué for an American audience, so that went the way of the dodo.

In the end, a crew of 4 or 5 of them showed up with a rough “script,” and we spent about 10 hours filming, in an office in Burton tower, in and around our labs in the basement, and finally out on the street in the Annex, where at the last minute someone in California had managed to arrange to have a church let us film in their parking lot.  (I think we spent about 2 hours filming in the labs, and they probably used about 10 seconds of that footage.  If I look bored and fidgety while standing between two parked cars, it’s because we spent over an hour filming even that segment, having to redo it each time a cloud passed by and they decided the lighting wouldn’t match a previous take, or a parishioner showed up to get their car.)  Although they had their own ideas about what they wanted to discuss (unfortunately for scientific accuracy, they were very attached to celebrating Star Wars’s anniversary by referring to “The Force” at every possible occasion), and I couldn’t entirely control the scientific story, they did their best to understand the concepts before writing their script and then correct anything I thought was too glaring.  After the filming, they sent me a script for Morgan Freeman’s voiceover, and again, added or subtracted things when I insisted that it was absolutely essential.  And then no, I didn’t get to meet him, but I was happy enough to hear he at least pronounced my name right!

It was a fun thing to do once, despite how much time it took!  I really hope that even if a show like this can’t teach anyone physics, it can at least do its part to keep getting people excited about some of the concepts.  I think of the remarks one of our Welsh lecturers this year made about the influence on him of The Dancing Wu Li Masters, and my similar experience as a kid reading The Tao of Physics, and remember that while scientific accuracy has its place, so does a light-hearted attempt to just engage people’s interest. 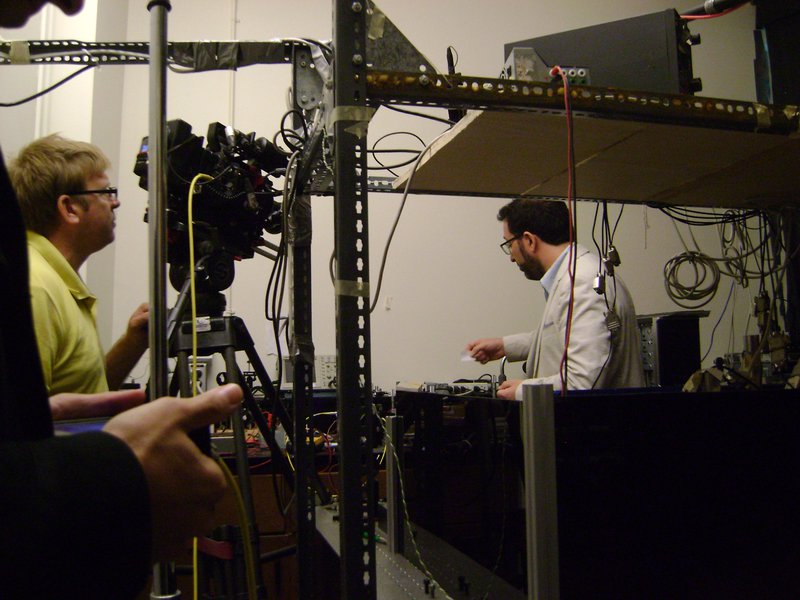 The preview can be seen here on Crave Tv: http://www.craveonline.ca/entertainment/1253217-preview-wormhole-morgan-freeman-season-7-5

If you subscribe to the Science Channel, you can watch the full episode here:
https://www.sciencechannelgo.com/through-the-wormhole-with-morgan-freeman/is-the-force-with-us/