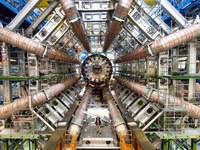 If the multi-billion-dollar Large Hadron Collider in Switzerland, the so-called Doomsday Machine, works as predicted by creating the so-called God Particle, thereby showing the world why stuff has mass, then someone will have to get a Nobel Prize for it.

The question is who, and to hear Frank Close tell it, there is a “controversy about to burst.”

The obvious laureate is Peter Higgs, the scientist for whom the Higgs Boson is named when it is not called the God Particle. But as Prof. Close, an Oxford theoretical physicist, describes in his new book, The Infinity Puzzle, that nod of nomenclature resulted partly from a citation error, and the credit is properly shared more widely. In fact, he says, the crucial idea was discovered three times by six people, independently but almost simultaneously, and all submitted papers within a few weeks of each other in the summer of 1964.

The most who can win a Nobel is three, and each must be alive. The problem, Prof. Close says, is that if the God Particle is discovered, and the problem of mass is solved, then six people deserve credit, of whom all are elderly but only one has died, and so the Nobel race could turn into an endurance contest.

The Nobel committee is famous for awarding prizes for ideas that are not only elegant and insightful, but also true. They will wait years for evidence, and decades for proof. And if there was ever an elegant unproven idea, it is the Higgs Mechanism, which Prof. Close prefers to call the Mass Mechanism.

“The basic seeds of matter … have a profound symmetry spoiled by mass,” Prof. Close told a standing-room only audience at the University of Toronto’s physics department this week, in advance of an interview with the National Post. “Mass is the thing that gets in the way of perfect symmetry for the particle.”

At the moment, physics can only really explain how particles bounce around and interact according to the basic forces. It cannot really explain why they have mass, which gravity turns into weight. In fact, the theory works best when particles are assumed to have no mass at all. But this clearly does not reflect the world around us, in which pretty much everything is more or less heavy.

The Mass Mechanism solves this by hypothesizing an ever-present field of waves that slows particles as they pass through it, like atomic flies in cosmic honey. The solution is mathematically elegant, and Prof. Close compares it to the score of a symphony, rich in potential, but impotent by itself.

“You’ve written a symphony,” he said. “But does nature want to perform it?”

The way to answer this question, though astonishingly expensive, is relatively straightforward. Since quantum mechanics predicts that waves have corresponding particles, then the waves that make up the Higgs Field should have a corresponding particle, the Higgs Boson, better known as the God Particle. To find it, a European nuclear research consortium, CERN, with international co-operation including Canada’s, built the world’s biggest and strongest particle accelerator underground near Geneva, with clockwise and counter-clockwise beams of superfast particles, and are now forcing them into head-on collisions inside the world’s most accurate particle detectors.

If it works, it will blast the God Particle into existence, perhaps for just a split second. And it’s on track to do so in the next few months. At the rate the experiment is scanning through different intensities of particle beam, it will have looked by then at the whole range where the God Particle is expected to be found. Then the clock will start ticking for the Nobel committee.

Success is not certain, of course. Prof. Close said there might turn out to be a whole family of new particles, “Higgsinos” perhaps, or a new class of subatomic quark, each of which contributes something unique to the “mass-ification” of the universe. Or maybe there is nothing to be found, and the mystery of mass will persist.