What drew you to this field?
Growing up, I had an unusual childhood hero – NASA’s Dr. Chris McKay. He was featured in TV science documentaries for his work, which involved travelling to extreme environments across the globe (including the Canadian Arctic) seeking to understand whether life might be capable of living on other planets. I found it inspiring. He combined an adventurous spirit and a passion for science. ( Below, Weaver photographs an Arctic hare; photo by Debora Griffin. )

ea was that by studying life which exists on Earth under the most extreme conditions, such as the bottom of the ocean and the Polar Regions, scientists could better understand where else in the universe life could exist. Because of its extremely remote location, working at PEARL demands a sense of adventure, along with a dedication to science – it’s an ideal place to achieve my (very geeky) childhood dream! 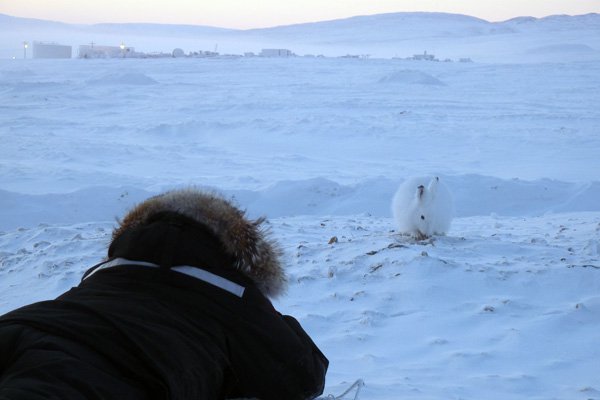 This field of research is incredibly satisfying to engage with. On the day-to-day operational level, I enjoy working hands-on with instruments. I love that we take something incredibly simple, and part of our daily life – sunlight – and almost magically turn it into a map of our atmosphere. That’s incredible. I also love that I get to travel to the edge of Canada to try to understand our planet better. ( Photo below by Dan Weaver. )

terms of the “big picture”, the goal of our work is to understand the Earth. We are still developing a complete understanding of how our atmosphere moves and interacts with the rest of the planet. I want to contribute to a field where the knowledge generated relates directly to improving our quality of life. We aim to do that by helping to understand climate change and ozone destruction.

It is important and surprising to see that air pollution reaches the most remote parts of the globe. The results of our work so far have been fascinating, and scary, and necessary.

I work in the Arctic, but this field involves remote places, urban metropolises, and everywhere in between. In the future, I hope to branch out and work with data from other areas of the world as well. I love that we work with satellites. I think it’s amazing that we are able to launch sophisticated instruments into orbit and observe how our planet is changing.

What about the sophisticated instruments you use up north? 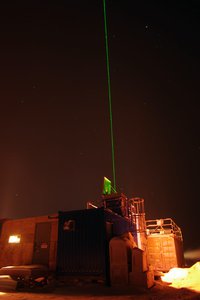 PEARL includes a suite of highly specialized instruments we use to collect atmospheric and related data – lidars, spectrometers, photometers, radiometers and more. Each instrument is used to measure something specific.

For example, we use our spectrometers to measure “the history” of the light that’s entered Earth’s atmosphere. We know what the spectrum of sunlight looks like before it enters our atmosphere from satellite measurements. As sunlight passes through our atmosphere, it interacts with gases which absorb specific wavelengths of light. Looking at the spectrum from light reaching our instruments on the ground, we can tell what gases it interacted with in the atmosphere and (to some extent) where those gases were located.

Another type of instrument we use at PEARL are Lidars ( pictured at right; photo by Pierre Fogal ). They shoot a powerful laser beam into the atmosphere, and use a large telescope to collect light, which is reflected back when it interacts with gases in the atmosphere. We can use this signal to observe clouds, aerosols, and water vapour on a continuous basis, which is valuable data.

For example, it can tell us whether clouds are made up of ice crystals or water droplets.

As home to a variety of instruments – including spectrometers and Lidars – we’re working at PEARL to piece together a more complete picture of our atmosphere and how it’s changing.

One part of the puzzle is climate change, which is a big topic in atmospheric science right now. We measure greenhouse gases, such as CO2, methane, and N2O, and provide the international science community insight into how these gases are changing from a high Arctic perspective.

In fact, PEARL is part of a global network of atmospheric observatories called TCCON (Total Carbon Column Observing Network); we’re its northern-most site worldwide. Climate change is a planet-wide phenomenon. To understand it, we need to measure everywhere, especially the rapidly-changing Arctic, which PEARL is exceptionally well located to do.

Another major research area for us is the ozone layer; we measure stratospheric gases involved in ozone destruction (e.g., CFCs, chlorine-containing molecules). When the first-ever observed ozone hole formed over the Arctic in 2011, this research became especially important. Ozone depletion had occurred regularly in the Arctic but until 2011 ozone holes had only been seen above Antarctica. Our team was at PEARL during this “ozone hole event,” and we were able to take critical measurements using spectrometers and balloon-based instruments, which were then confirmed using satellite data.

The desire to understand whether this type of dramatic event may happen again in the future motivates us to continue our work. That’s why PEARL is part of a global network of observatories called NDACC (the Network for the Detection of Atmospheric Composition Change), which helps us collaborate internationally, working with scientists around the globe to try to answer questions like, “Why did a hole occur in the ozone layer over the Arctic in spring 2011? Will it happen again? What does that mean for our environment?”