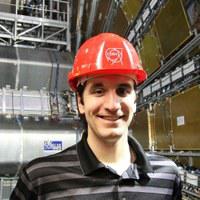 Feb. 19, 2016, By UT Physics
These winners include Steven Schramm, Toronto (Canada), whose thesis was titled: Searching for Dark Matter with the ATLAS Detector in Events with an Energetic Jet and Large Missing Transverse Momentum.

Steven completed his PhD with Professor Pierre Savard in 2015.

The four winners represent the strong and diverse group of dedicated students
who finished their Ph.D. thesis with ATLAS data in 2015. They were selected
by the CB Chair Advisory Group in 2014-2015, which acted as the Thesis Awards Committee,
from 33 nominations received. The nominations were of a very high standard,
encompassing major achievements in all areas of ATLAS results and activities.

The award ceremony will take place during the ATLAS Week,
on Thursday 25th February 2016.