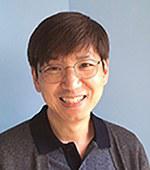 The Canadian Association of Physicists (CAP) is pleased to announce that the 2017 CAP/DCMMP Brockhouse Medal is awarded to Yong Baek Kim, University of Toronto, for his leading work on the effects of large spin-orbit coupling on exotic ground states in geometrically frustrated and highly correlated quantum materials.

Yong-Baek Kim is a renowned condensed matter theorist whose research has had significant impact on our understanding of the physics of geometrically frustrated and highly correlated quantum materials. He has been working at the leading edge of the effects of large spin-orbit coupling on exotic ground states in materials, especially those arising from frustration and Mott physics. This has naturally focused on the very topical area of iridate physics, and there is no doubt that Yong Baek has been a key international figure in this field. He has produced a significant and well-cited body of work on iridate quantum magnetism in the presence of Kitaev and Kitaev-like interactions. This general theme – the role of spin orbit coupling in correlated electron physics – is one that has only just begun to be explored both theoretically and experimentally. However, the field possesses a large scope for interesting new exotic ground states due to 4d and 5d transition metal complexes, which are much less studied, at present, than their 3d counterparts.

Yong-Baek’s theoretical efforts have been guiding and providing a framework through which this experimental work can be rationalized. It is easy to foresee that his work will become even more influential in the immediate future. Yong Baek Kim’s body of work on spin orbit coupling, topological phases of matter and geometrical frustration is both highly original and proven to be influential to a large body of condensed matter physics research.

Finally, he has played a key leadership role on the international scene of quantum materials research as a co-organizer of many workshops and conferences related to geometrical frustration and topological properties of high correlated materials. He is unquestionably highly deserving of the CAP Brockhouse Medal.

The CAP Brockhouse Medal, which is sponsored jointly by the Division of Condensed Matter and Materials Physics (DCMMP) and the Canadian Association of Physicists (CAP), recognizes outstanding experimental or theoretical contributions to condensed matter and materials physics. It is named in honour of Bertram Brockhouse, whose outstanding contributions to research in condensed matter physics in Canada were recognized by the 1994 Nobel Prize for Physics. The annual Brockhouse medal was introduced in 1999.

Dr. Kim will be presented with his medal at the Recognition Reception at Queen's University on Thursday, June 1, 2017. The Awards Reception is the closing event of the CAP Congress hosted by Queen's University in Kingston, Ontario, from May 29-June 1. Please refer to the Congress program (http://www.cap.ca/en/congress/2017) for the schedule of plenary talks by CAP medal winners.

ABOUT the Canadian Association of Physicists (CAP)

The Canadian Association of Physicists, founded in 1945, is a professional association representing over 1600 individual physicists and physics students in Canada, the U.S. and overseas, as well as a number of Corporate, Institutional, and Departmental Members. In addition to its learned activities, the CAP, through its charitable arm - the CAP Foundation, also undertakes a number of activities intended to encourage students to pursue a career in physics.