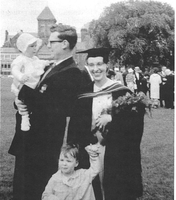 Despite a widespread belief that they were a tiny minority in twentieth-century physics, women have been far more present in the field than we imagine. In this essay I explore three periods in the history of the University of Toronto physics department between 1890 and 1990. In the first expansionist period (1890-1933) women were much in evidence, earning nearly 20 percent of the university's doctoral degrees in physics; during the middle years of the century (1934-1961), some of these women taught in the physics department, but participation in the graduate program declined, with no women completing doctorates; between 1962 and 1990, when physics was again expanding rapidly, women gained some ground but still earned less than five percent of the doctorates. The essay explores the histories of nine of the women who earned PhDs in physics at Toronto during this third period, with a view to discovering the factors that helped or hindered their success in the field.

Source: Canadian Journal of the History of Science, Technology and Medicine

Lead photo caption: "Olga Mracek Mitchell and her family on the day her Ph. D. was granted (1962)" courtesy of Dr. Mitchell