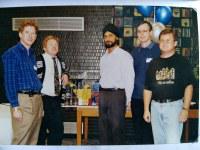 The Pecora award is sponsored by the U.S. Department of the Interior and the National Aeronautics and Space Administration.  It is presented annually to recognize outstanding contributions by individuals or teams using remote sensing to understand the Earth, educate the next generation of scientists, inform decision makers or support natural or human-induced disaster response.

The citation for this award ( https://www.usgs.gov/news/pecora-award-honors-excellence-earth-observation-0 ) notes that "Terra is arguably one of the most successful Earth-sensing satellites ever deployed."  Terra was launched in December 1999 carrying a suite of instruments to study the Earth-atmosphere system.  One of these is the Measurement of Pollution in the Troposphere (MOPITT) instrument ( https://mopitt.physics.utoronto.ca/ ).  MOPITT was conceived by Prof. Drummond, funded by the Canadian Space Agency, built by four Canadian companies, and tested in the Space Instrument Characterisation Facility in the basement of the Physics Department with the help of a small army of students, postdocs, and technical staff.  As noted in the citation, MOPITT was the first instrument "designed to observe the distribution and transport of tropospheric carbon monoxide and, along with other sensors, has helped advance our understanding of air quality and biomass burning emissions."

As the 20th launch anniversary of Terra approaches, we congratulate the Terra and MOPITT teams on the spectacular success of this mission and for receiving the William T. Pecora Team Award!