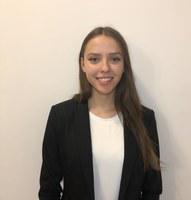 Awarded by the Faculty of Arts & Science on the recommendation of the Department of Physics, the Loudon-Hines Gold Medal and Scholarship is presented annually to a top graduating student in the Specialist or Major program in Physics who also demonstrates creativity and a clear promise in the discipline of physics.

The recipient this year is Celina Pasiecznik and we asked her some questions about receiving this award.

Congratulations Celina. What does being the recipient of this prestigious gold medal mean to you?

I am honoured to have received this award. As a graduating student, I am very thankful to the entire Physics Department, especially to the Professors and TA's that made learning Physics so enjoyable and interesting. I appreciate being recognized for the effort I put into my degree over the last 4 years.

You recently completed your degree, what are your future plans?

I have graduated University of Toronto with a Bachelor of Science in the Physics Specialist program with a Mathematics minor. I will be pursuing a master’s degree at Oxford University in Mathematics and Theoretical Physics. I have also been accepted into graduate studies at MIT in aeronautics and astronautics where I plan on completing my PhD after my studies at Oxford. My lifelong dream is to become an astronaut and contribute to the advancement of space exploration.

More information on the Loudon-Hines Gold Medal and Scholarship

Over the past 128 years, the gold medal has been awarded to celebrated and esteemed physicists including Colin Hines, Ph.D., Professor of Physics, after whom this new medal is co-named.

The Loudon-Hines Gold Medal and Scholarship in Physics honours both Professor James Loudon and Professor Colin Hines, and celebrate the best and most promising young physicists who will carry on an important legacy.