We can arrange tours, talks and workshops.

In June 2021 students in the physics club at Garth Webb SS had a talk on Superconductivity. 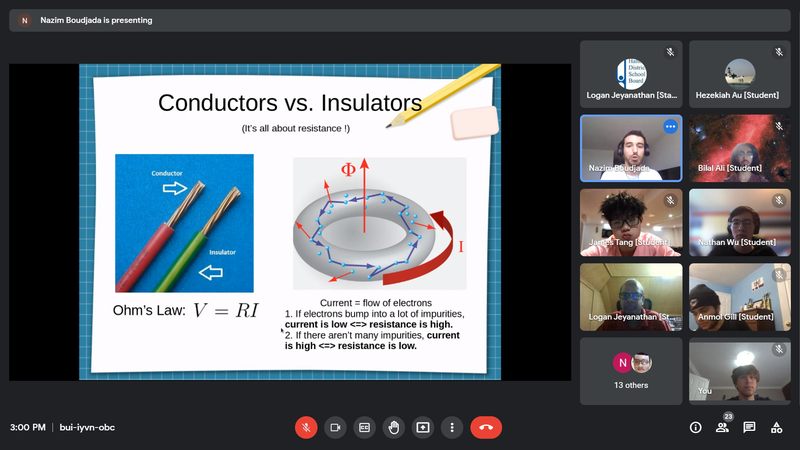 In December 2019, 15 grade 12 students were given a workshop on gravitational lensing and then a tour of the Department of Physics. 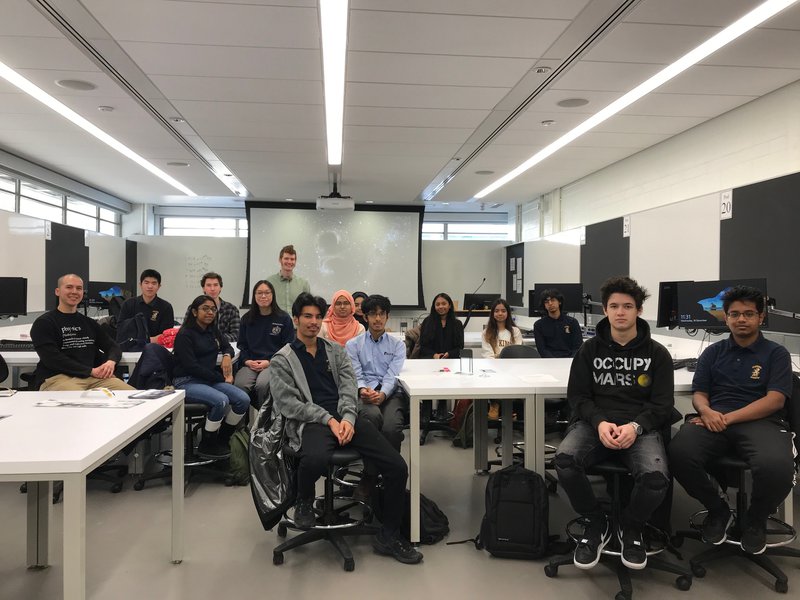 In November 2019, 35 grade 12 students were given a workshop on gravitational lensing and then a tour of telescopes and the Earth Sciences building. 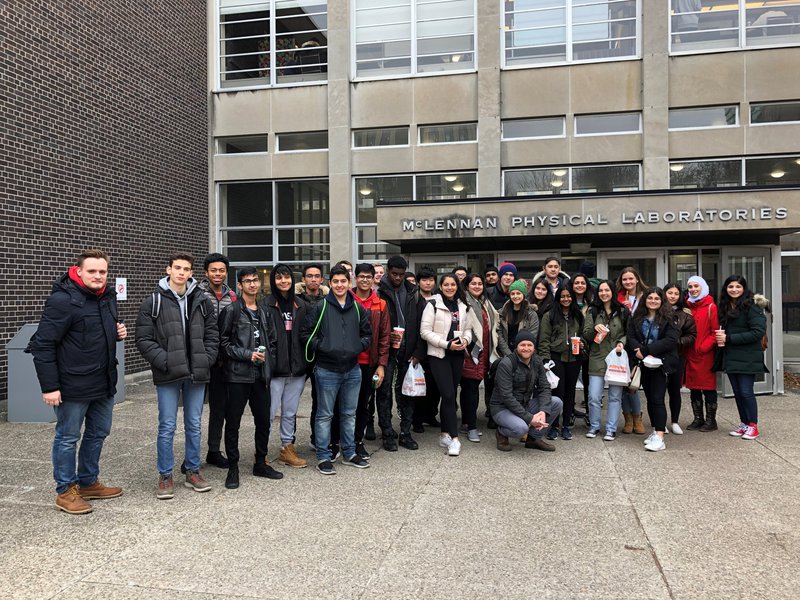 In April 2019, 62 grade 11 students were given a workshop on diffraction and a full campus tour.

In Dec 2018, 57 grade 11 and 12 students were given a workshop on Gravitational Lensing and Black Holes and then given a talk on High Energy Physics by graduate student Haider Abedi. They also saw the telescopes! 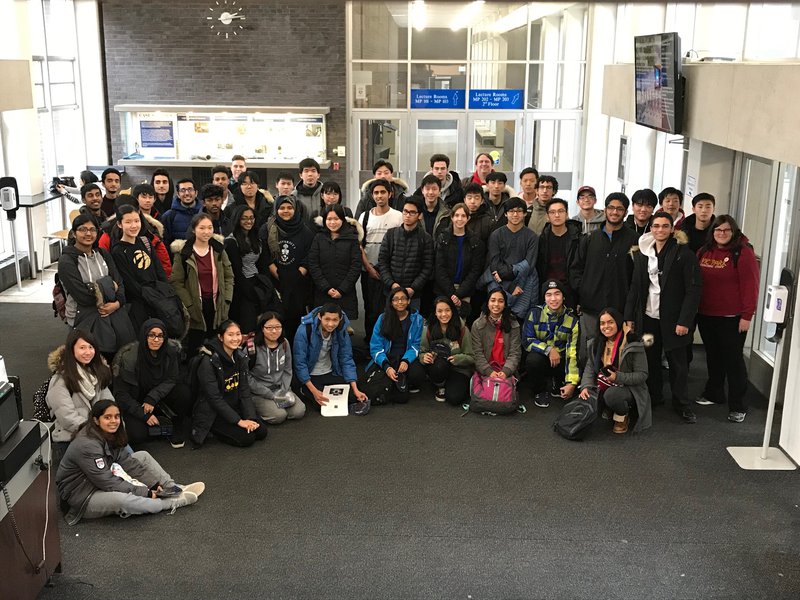 In Nov 2018 45 grade 11 students from Leaside High School were given a workshop on Gravitational Waves and a tour of the U of T campus.

In Nov 2018, 65 grade 11 students were given a workshop on diffraction and a full campus tour.

In May 2018 grade 11 students were given a workshop on diffraction and a full campus tour. 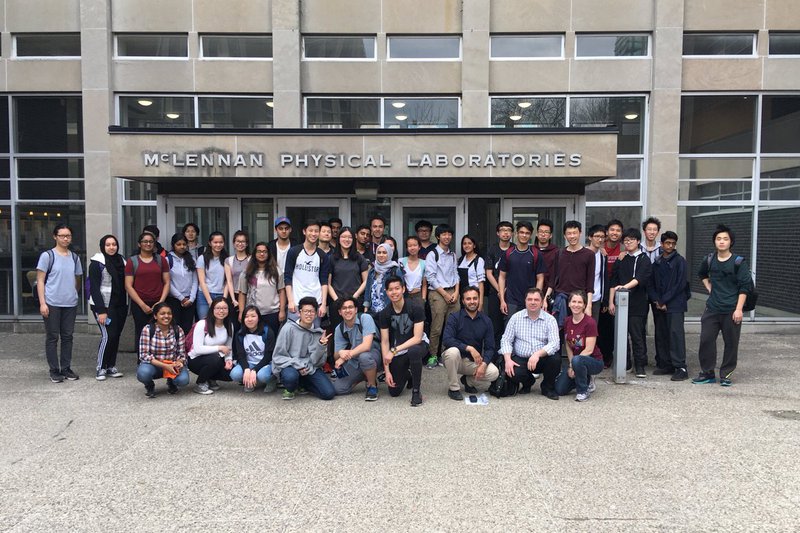 In April 2018 grade 11 students from Leaside High School were given a workshop and a full campus tour.

In March 2018 grade 12 students from Leaside High School were given a workshop on Gravitational Waves, a physics lecture and a tour of the Physics Department. 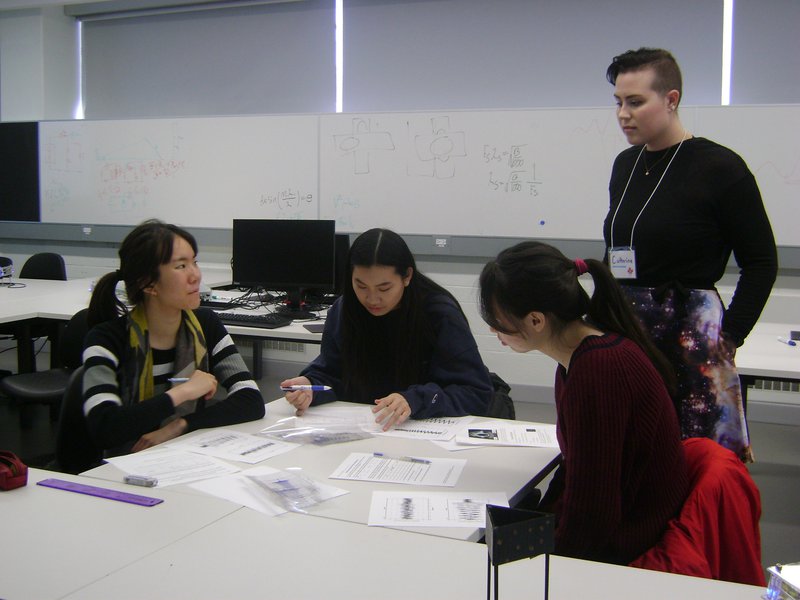 In October 2017 the students from Braemar College came to Department for a talk on studying physics and some lab tours. 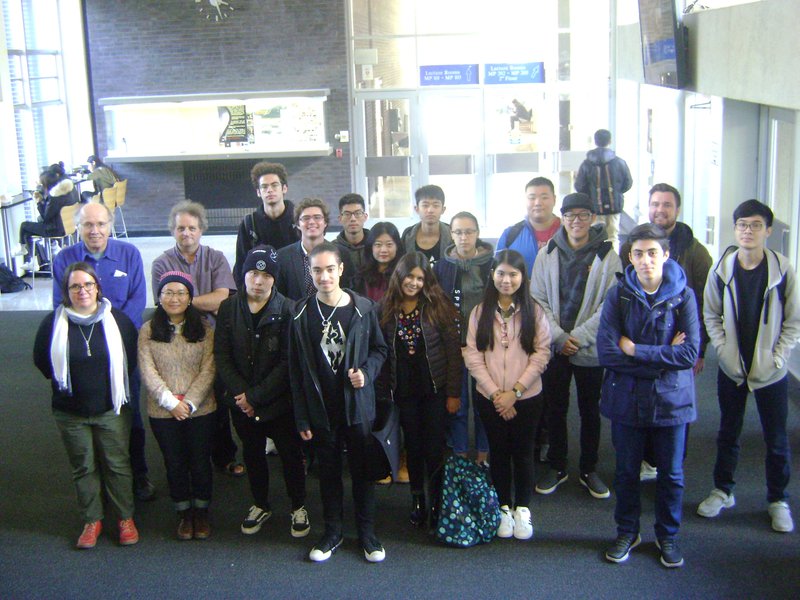 In May 2017 students from Weston Collegiate Institute were given a workshop on kinematics and lab tours. 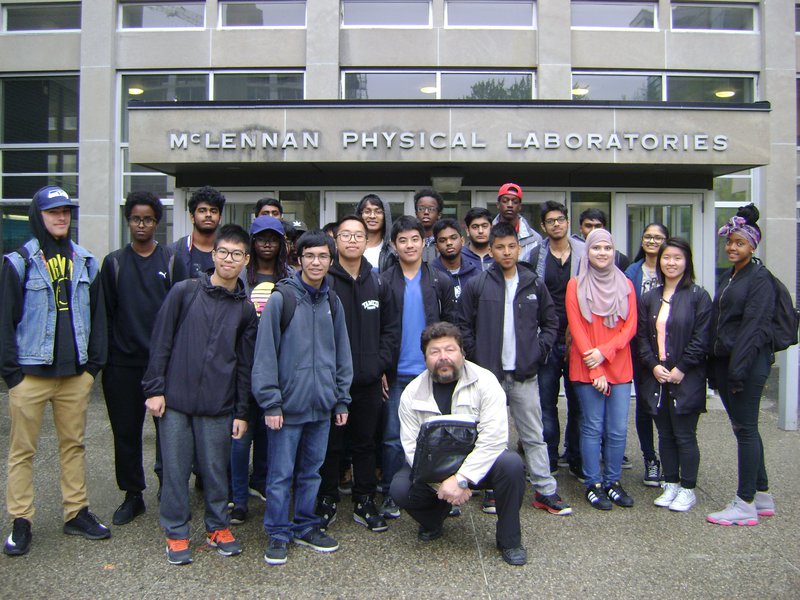 In April 2017 students from St. Paul's CSS were given tours, talks and physics demonstrations. 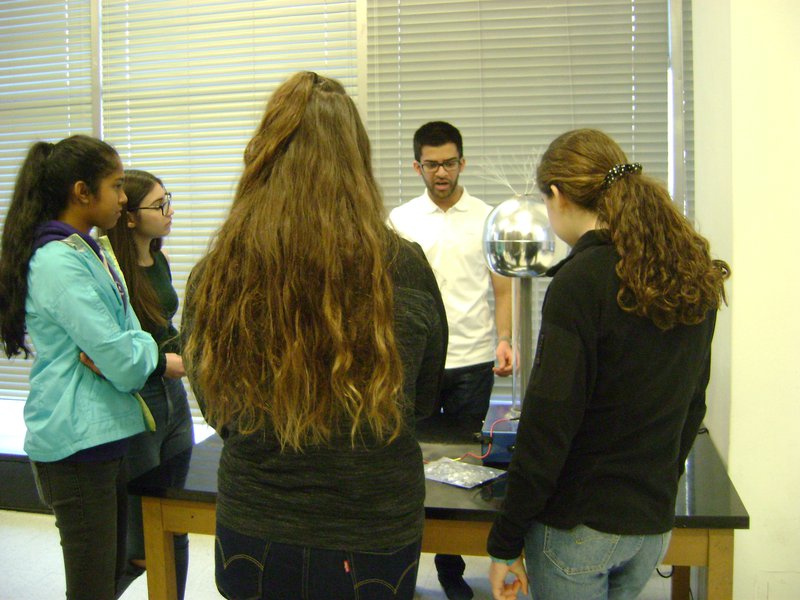 On Thursday, December 1, two grade 11 physics classes came to visit. Paul Kushner gave a talk on careers for physics graduates. Then they were treated to tours of the Undergraduate Labs by Jason Harlow.

They also saw research labs that are doing research on the atmosphere, quantum optics and atoms. 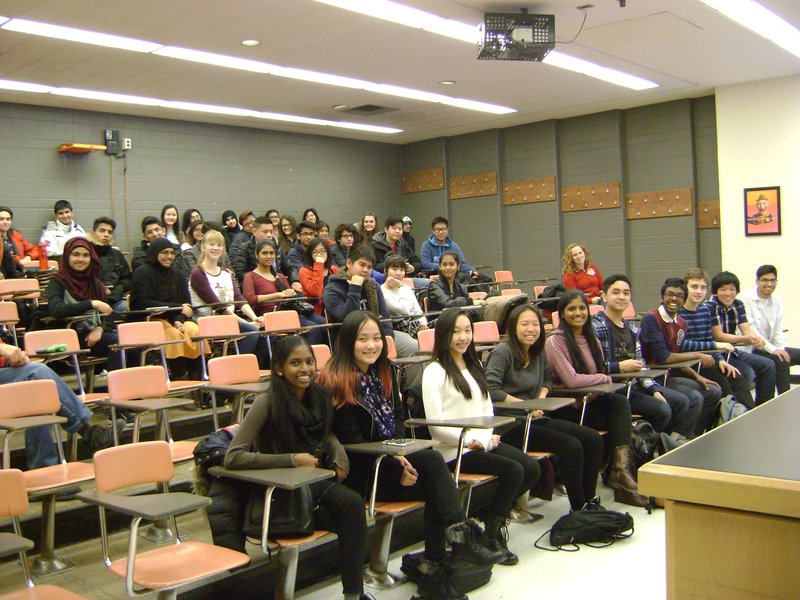 On Friday, November 25, 2016, 18 students and their teacher visited the Department of Physics for a workshop and tours. The workshop was run by Xingxing Xing and was on Mechanics. After the workshop everyone was taken on tours of Professor Joseph Thywissen's Lab and Professor Stephen Morris' Lab. 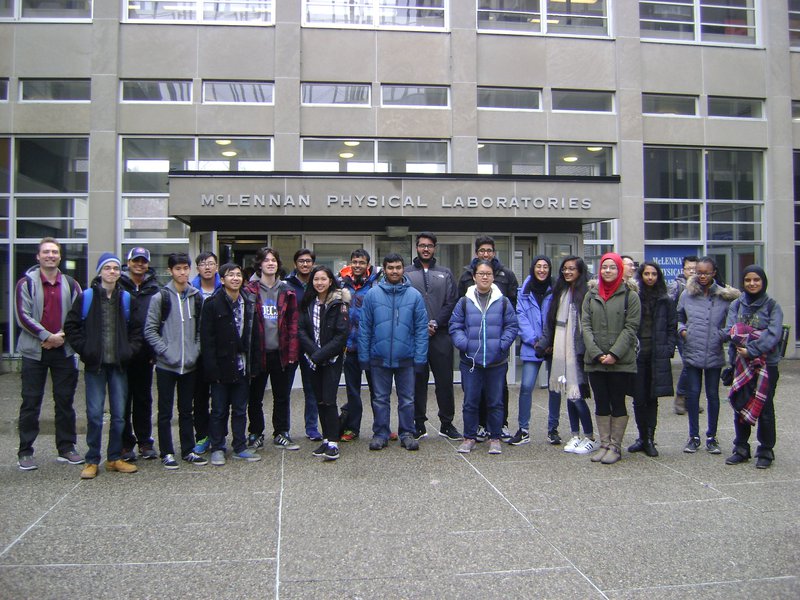 On Thursday, May 28, the Department hosted another school visit, this time for grade 12 students from Victoria Park Collegiate. The students had presentations on earthquakes, particle physics and careers in physics. The teacher of this class, Sarah Torrie has a connection to the Department too, she graduated in 2002 with an Astronomy and Physics Specialist and fondly remembers being taught Macrophysics by Stephen Morris.There was also a similar school visit on May 21 from Newtonbrook Secondary School.

The Department hopes to continue these types school visits and inspire a new generation physicists. 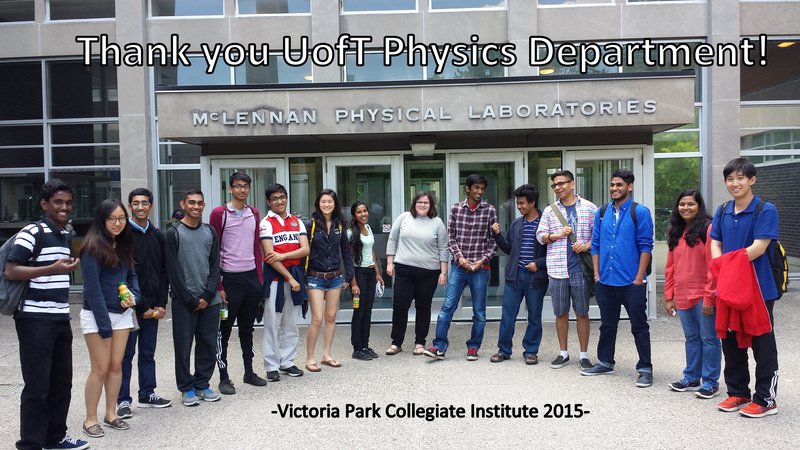 As part of the Department’s Outreach activities to engage high school students in physics, on May 8th, twenty five grade 11 students from Danforth Technical School were treated to an educational afternoon at the Department of Physics.

They were given presentations by Paul Kushner (Undergraduate Chair), Prof. Peter Krieger, and Prof. Stephen Morris.

Prof. Paul Kushner talked about “Physics at U of T and Beyond”. Students were told that at U of T, they would learn how physics governs  particles, forces, cosmology, climate change, biological processes, quantum mechanics/computation and exotic quantum materials.  Prof. Kushner discussed the physics undergraduate program and explained that U of T physics graduates are employed in a wide range of fields.

Prof. Peter Krieger presented “Experimental Particle Physics in 15 minutes”. He discussed particle physics, the Higgs boson and CERN. The students were shown pictures of the ATLAS calorimeter which was built at U of T with the help of undergraduate students. Prof. Krieger talked about subatomic particles and everyday life, giving
examples of x-rays, microscopes and beam therapy for cancer. The students were curious about medical isotopes and Prof. Krieger told them how they work and how they are used by hospitals.

Prof. Stephen Morris talked about the continuum limit and the convection of the sun, ocean and earth.  He discussed fluid mechanics and temperature gradients and showed a double pendulum to demonstrate chaos.

After the presentations, they were then taken on a tour of the department. First, Steven Butterworth (manager of Physics Computing Services), showed them the “Big Mac” computer cluster, then they were shown the two cold atom labs belonging to Prof. Aephraim Steinberg and Prof. Joseph Thywissen. The tour ended in Department Chair Stephen Julian’s Low Temperature Lab.

We hope to continue these types of activities and inspire a future generation of physicists!