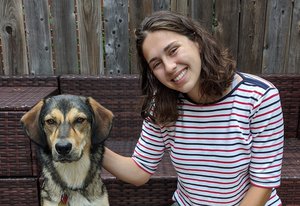 Laura ended up in physics by process of elimination. In high school, she knew she liked math and science, but never had a specific interest in any particular subject. By the end of her first year at McGill, she had discovered that she found chemistry labs stressful, biology labs boring, and physics labs surprisingly bearable. She therefore decided to major in physics, but with much trepidation. After all, physics is only for really really smart people! After a few months in the program, she realized that this was a complete lie that was probably preventing lots of perfectly capable people from pursuing physics. This sparked Laura’s interest in working to make physics more accessible to people who would not typically consider it as an option.

Laura found the problem-solving aspect of undergraduate physics enjoyable, but was not enthusiastic about the underlying subject matter. She did not consider graduate school until discovering the Atmospheric Physics group at U of T. This excited her because of the possible applications outside of academia – perhaps in government or legal decision-making. Now, Laura is starting her third year working with Professor Kaley Walker on evaluating climate models from a variety of international climate agencies. This involves comparing climate model output of atmospheric gas concentrations to satellite measurements in order to diagnose issues with the models, which requires a comprehensive understanding of how the atmosphere works both chemically and dynamically. Knowing where models need improvement helps to better understand existing model predictions and to efficiently upgrade the models, both of which are crucial to determining how the climate will change in the coming decades.

Outside of research, Laura is the Director of Communications for the PGSA and co-chairs Physibility, a group dedicated to increasing the visibility of underrepresented people in physics by hosting social events and spreading awareness of challenges faced by marginalized groups.

When she’s not staring at maps, screaming at Python, or writing e-mails, Laura normally participates in a variety of sports: volleyball, rock climbing, inner tube water polo, soccer, softball, and most recently, Australian football. Since these haven’t been available in recent months, she has adopted a 1-year-old mystery shepherd mix named Nala and spent countless hours training her to do useless but adorable tricks. Her current favourite is “roll over,” which she now does unprompted in the hopes of being offered some chicken (Nala, not Laura).