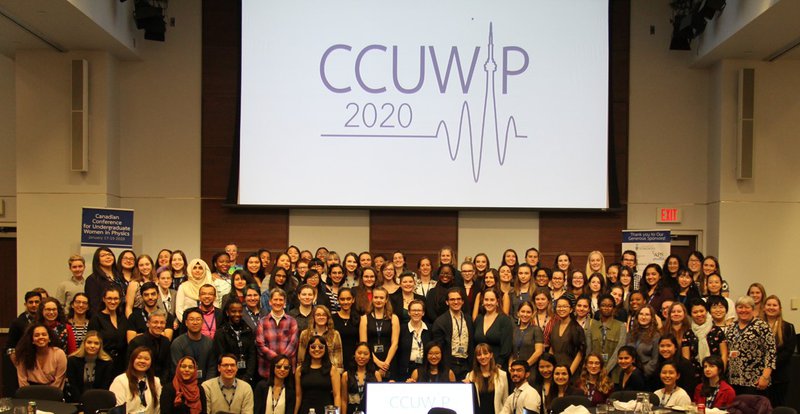 The Canadian Conference for Undergraduate Women in Physics (CCUWiP) is an annual conference that has been running since 2014. This year, it was hosted here at the University of Toronto from January 17-19, gathering participants from all over Canada. With 130 registered delegates, the conference bustled with physics undergraduates of all genders participating in the various panels, lectures, and workshops offered.

Delegates had the opportunity to network with fellow undergraduates, physicists hailing from various disciplines, and industry professionals. Through the physics and career panels, delegates explored the possible options open to them with their undergraduate physics degree.

Workshops ranging from cloud chambers to research presentation skills to mental health provided a diverse range of topics for the delegates to explore in smaller groups. As many physics conferences focus on just the physics, CCUWiP aimed to also provide time to discuss many issues that minorities in physics communities face. For many delegates in attendance, this was their first opportunity to meet others like them as they come from much smaller colleges or universities.

Running with tradition, a guided discussion on imposter syndrome was led by Renee-Michelle Goertzen; the representative from the American Physical Society (APS). This topic came up multiple times throughout the conference with people in all stages of their careers expressing the feelings associated with imposter syndrome. One of the main steps in overcoming imposter syndrome is having discussions like these that help to foster a supportive environment.

The CCUWiP is a part of a series of conferences in the United States, respectively called the Conference for Undergraduate Women in Physics (CUWiP).

On Saturday January 18 at 2pm, all thirteen sites connected via teleconference for a keynote lecture from Professor Andrea Liu. Professor Liu is a theoretical soft and living matter physicist at the Department of Physics and Astronomy at the University of Pennsylvania. She discussed her work and the waving path that brought her to her current position.

The Saturday of the conference came to an end with a banquet dinner held at the MaRS Discovery District. Here delegates ate and chatted away with new friends they had made while also taking advantage of another opportunity to connect with speakers and guests from the conference one-on-one. Professor Kim Strong delivered the banquet talk on some of her own work in studying the atmosphere, sharing tales of a certain pesky stratospheric balloon that ran a course much different than expected. 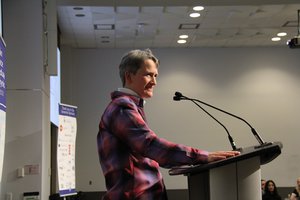