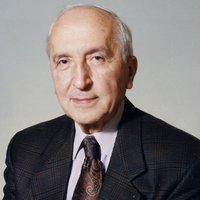 BORIS PETER STOICHEFF, OC, FRS, FRSC University of Toronto Professor Emeritus Died peacefully in Toronto on April 15, 2010. Predeceased by parents Peter and Vasilka Stoicheff and by sister Hope Stoicheff. Boris was born in Bitola, Macedonia in the former Yugoslavia, June 1, 1924 and immigrated to Toronto in 1931. A graduate of Jarvis Collegiate, Boris earned his Ph.D. in Physics at the University of Toronto in 1948. From then until 1963, he undertook groundbreaking work in Spectroscopy at the National Research Council in Ottawa, discovering the Generation of Sound by Light and the Inverse Raman Effect and building the first Maser and Laser in Canada. Returning to the University of Toronto as a Professor of Physics in 1964, he developed one of the world's leading laser laboratories and supervised many Ph.D. students who went on to become top researchers and with whom he remained close to the end of his life. Boris' work earned him fellowships in the Royal Societies of London, of Canada and many other academies. He held honorary degrees from many universities and was appointed an Officer of the Order of Canada in 1982, for his achievements in physics. He served as President of the Optical Society of America in 1976 and of the Canadian Association of Physicists in 1983. In 2002, he published a biography of his lifelong scientific mentor, Nobel Laureate Gerhard Herzberg, with whom he had worked at the National Research Council. Guided by an intense appreciation of art, Boris continued until recently, to write and lecture on how painters have depicted light in their work. He was a strong supporter of Toronto's Macedonian community. For the last 30 years, he was a much-loved Senior Fellow at University of Toronto's Massey College. Extraordinarily generous with his time and energy, humorous, kind and gentlemanly, Boris was a leader in the Canadian and international scientific communities. Widely-read, insatiably inquisitive and always a privilege to be with, he will be missed by all who worked with and knew him. He leaves his wife Joan, son Peter (Kathryn Warden), grandchildren Alixandra and Christopher and sisters Anne Leigh, Dorothy Arnold, Margaret Stoicheff and Jessie Channer. The family would like to thank Dr. Martina Trinkaus and St. Michael's Hospital for their medical care and the wonderful nurses, volunteers and staff at Perram House palliative care residence where Boris spent his last months.