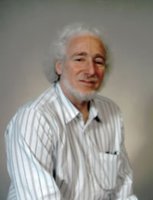 Joseph died peacefully at his home near Tweed, Ontario on Sunday, June 23rd at the age of 81 (or as he liked to call it, three to the power of four). He was greatly loved and cared for by his immediate family, Mary, Sam and Kendra and Miles, Esther and Silvana, and will be greatly missed by them and by the family, friends and communities that he was a part of.

Joseph was born on April 3rd, 1932 in Toronto, to Florence Levine and David Vise, and was the younger brother of Herbert. As a child he was known for his curiosity and love of taking things apart in order to figure out how to put them back together, a gift and talent that he continued to apply through the rest of his life, in work, family, friendships and community.

Joe graduated in Maths and Physics from the University of Toronto in 1954 and received his doctorate in Nuclear Physics from Columbia University in 1963. In 1958 he met Mary Elizabeth Henderson and they were married in Ambler, Pennyslvania in 1959. Over the next fifteen years Joseph and Mary travelled, lived and worked around the world. Joseph worked in community development in San José Chacaya, Guatemala, through American Friends Service Committee; taught Physics at the University of Nairobi in Kenya, through CUSO; was CUSO field staff officer opening their program in Havana, Cuba; and taught at the University of Lusaka in Zambia. Their first two children Esther and Samuel were born in Nairobi and their third child Jonathan was born in Havana.

Joseph returned to Toronto in 1977, teaching briefly at York University and then permanently at the Physics Department at University of Toronto, until he retired in 1997.

In 1998, their son Jonathan died of cancer at the age of 25. In 2001 Joe and Mary made the move to their beautiful home near Tweed, Ontario.  Joseph had a passion for life, justice, nature, teaching, argument and politics that had an impact on everyone he met. Profoundly self- reliant, he believed deeply in community and ethical living. He drew inspiration from his Jewish family history and politics of revolution, persecution and hope, and applied it to the many worlds he lived in. In heart and body he was an activist, very involved in anti- apartheid struggles in the 1970s and 80s through TCLSAC, active in the NDP, Science for Peace, anti-nuclear organizing, and Palestinian/Israeli peace and justice work. Music was a sustaining passion and he loved to volunteer as an usher for Tafelmusik and Toronto Consort orchestras. He valued his time as a volunteer board member at the Gateway Community Health Centre in Tweed, where he learned much about the intricacies and importance of our healthcare system. His early years of family summers in Bobcaygeon and then as camp counselor in Lake Temagami led to a lifelong love of canoe- tripping and the natural world. During the last decade of his life, he and Mary were so grateful for the beauty, independence and sustainability of their life on their land in Tweed.

A pathmaker, Joseph's appreciation of the world was in essence that of a physicist - he had a deep understanding of the natural order of the world and laws of the universe and to him that was beauty. In the last months of his life, Joseph grew to rely on others to take care of him and to do all that he had previously done so capably. He had a deep belief that dying is a natural part of life and this helped him and those around him. Joe was able to stay at home due to the dedicated support of Mary and his family, his community, and especially the amazing palliative care team of nurses, doctors, personal support workers, and Gateway CHC. The family thanks everyone for their support, it would not have been possible for him to be at home without it.  A celebration/memorial was held in Toronto on Sunday July 21, 2013.