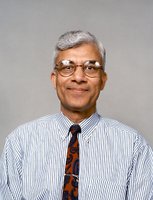 Rashmi Desai, Professor Emeritus in the Department of Physics, passed away on June 1, 2020 after battling lymphoma for several years. Rashmi was a well-loved member of the Department and internationally well-known for his work in theoretical condensed matter physics.

Rashmi grew up in India and obtained his Honours BSc from Bombay University in 1957, followed by his PhD from Cornell University in 1966. Following several years as a Research Associate at MIT, he joined the University of Toronto as an Assistant Professor in 1968. He was promoted to Associate Professor in 1971 and full Professor in 1978, becoming Professor Emeritus in 2004. He served the University of Toronto in a number of administrative roles, including Vice-Dean (2005-2006) and Associate Dean (2000-2003) at the School of Graduate Studies, Co-chair of the UofT Materials Institute (1993-1997), and Associate Chair (1992-1997) and Coordinator of Graduate Studies (1983-1987) in the Department of Physics. He also held many visiting appointments over the course of his career, spending time at IBM and at institutes in Israel, Germany, Japan, and the USA.

Rashmi was interested in the physics of complex fluids, such as polymers, liquid crystals, colloidal suspensions, micellar systems, microemulsions, and Langmuir monolayers. He and his research group applied non-equilibrium and equilibrium statistical physics, elasticity theory, hydrodynamics and electromagnetism to a range of problems. These included the role of fluctuations in polymer phase diagrams; kinetics of phase ordering and phase separation including spinodal decomposition and nucleation; pattern formation and selection in non-equilibrium phase transitions; instabilities in dynamical systems leading to chaos; and control of chaos.

In addition to publishing more than 130 papers and giving more than 200 invited talks, Rashmi co-authored the textbook "Dynamics of Self-Organized and Self-Assembled Structures" with Raymond Kapral (Department of Chemistry, UofT) in 2009. He was a dedicated supervisor, graduating 18 MSc and eight PhD students, as well as supervising more than ten postdoctoral fellows.

In addition to being named a Fellow of the American Physical Society in 2001 for “applications of statistical mechanics to materials science, including: phase separation and ordering kinetics in systems with competing interactions, Langmuir films, ferromagnetic films, epitaxially grown solid films, order-order transitions in polymers”, Rashmi was also recognized by the APS in 2018 for his 50th year as a member, having joined in 1968. When interviewed about this for the Spring 2019 issue of the Physics Department newsletter, Rashmi said “I am just enjoying my retirement by learning more Physics from other people's research!” In July 2019, Rashmi was proud of being presented with the Albert Nelson Marquis Lifetime Achievement Award by Marquis Who's Who, in recognition of his outstanding contributions to his profession.

Rashmi was an informal mentor to junior colleagues, always supportive, thoughtful, and unfailingly cheerful. His kind words and friendly smile will be missed by many in the Physics Department, but will be fondly remembered for years to come.