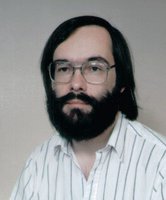 Magnetic resonance provides a local probe especially well suited for studying the anisotropic features of the cuprate superconductors. The electronic properties can be probed at various positions in the crystal structure by selecting the appropriate nucleus for study. Illustrated here is the three layer bismuth compound with the superconducting copper oxide planes coloured yellow.

My research interests have focused on effects in the dimension perpendicular to the planes. Lee-Meng Song, recently graduated, has measured the physical properties of the middle and sandwiching CuO2 layers which turn out to be distinctly different from each other. Erica Bird and I have recently used Spin Echo Double Resonance to measure the interlayer exchange coupling between local moments on the CuO2 planes.

Ya-Wei Hsueh, now a PDF at SFU, has studied PSYCCO crystals provided by M. Reedyk of Brock University. We have found that a weak pseudogap develops below 150 K. This is in contrast to the underdoped YBCO where the effects of a pseudogap are much stronger. We have also found signatures of the pseudogap in the PbO layer revealing the distinct physical nature of the two crossover temperatures of the pseudogap.

Erica Bird is now working on the 2D Heisenberg Antiferromagnet copper formate tetrahydrate. Our interest in this compound stems from the need to experimentally probe the crossovers from the Neel state to the Renormalized Classical to the Quantum Critical Regime. At present it is unclear whether the latter regime has been observed experimentally.

Zhara Yamani is working on the Ortho-II phase of YBCO for her PhD. At present we are investigating the chains which undergo a phase change into a state with frozen charge oscillations. This is in addition to the pseudogap behaviour seen in the planes. She is also working on the effects ofimpurities on the pseudogap.

Our NMR/NQR spectrometer is centred around an 11T superconducitng magnet with variable temperature insert (1.5-300K). We also have access to our group's 18T magnet and a dilution refrigerator (5 mK). Although high-Tc superconductors have been around for 15 years now there are still plenty of opportunities to contribute to the physical understanding of these complex materials.