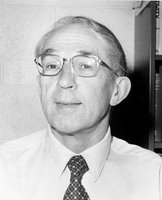 Jan was the son of an English professor at the Lyceum in Delft and his Belgian mother, of French extraction. When he was eight years old, his family moved to Amsterdam and it was there that he enrolled as a student in 1941-42. His studies were interrupted until 1945 owing to World War II. He completed his doctoral thesis in 1948 under the guidance of Professor de Boer, in which he developed a quantum mechanical theory of pressure-induced infrared absorption.

In 1952-53, Jan obtained a post-doctoral fellowship to work with Professor J.H. van Vleck at Harvard University. This sparked his interest in the theory of magnetism and in problems in condensed matter in general. On his return to Holland, he joined the faculty of the Institute-Lorentz at the University of Leiden. In 1958, Jan joined the Department of Physics at the University of Toronto. During his 30-year career at U of T, Jan made singular contributions in research, in undergraduate teaching, and in the teaching and training of postgraduate students. His research was focused on intermolecular spectroscopy and the properties of solid hydrogen, and he had strong interests in general relativity and cosmology.

Jan’s research efforts were recognized by numerous awards. In 1964, he became the first winner of the Steacie Prize in Natural Sciences. In 1965, he was elected a Fellow of The Royal Society of Canada. In 1974, he was honoured by The Netherlands Academy of Sciences, and in 1976 he was awarded the Gold Medal for achievement in physics by the Canadian Association of Physicists.

Jan was also recognized as an outstanding teacher - his brilliant lectures inspiring generations of graduate students to excel in their own teaching. His legacy is commemorated at the University of Toronto by the Van Kranendonk awards, which are presented annually to recognize the outstanding contribution to the teaching of undergraduate Physics in the Department of Physics by teaching assistants. The variety of scientific areas in which Jan’s former students and postdoctoral fellows are presently working is a living testimonial to his talents as a teacher.

In 1977 Jan married Seija and on Jan’s retirement they moved to Kelowna, British Columbia where they bought a house on the western shore of Okanagan Lake.

Jan was very proud of his adopted country and felt honoured to be a Canadian. He enjoyed the natural environment of BC and travelled widely throughout his retirement years. Jan’s passion was working in the garden with Seija, reading, walking, swimming and kayaking.